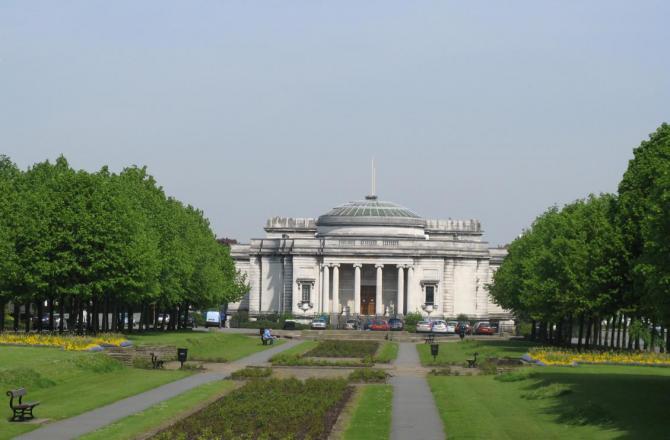 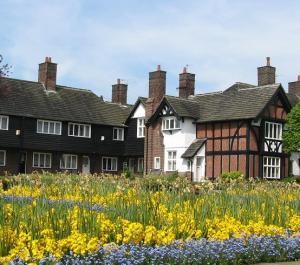 Port Sunlight Village, the famous ‘garden village’ created and founded in 1888 by William Hesketh Lever and named after his own brand of soap is a designated Conservation Area near Bebington on the Wirral. Visit the Port Sunlight Museum for a fascinating insight into Lever and the day to day life of village residents in the past. Lever is also credited with enacting early ideas of a National Health Service. There were pros and cons – Lever introduced numerous welfare benefits, social clubs and a cottage hospital at Port Sunlight, and there is little doubt that workers in the Village enjoyed a much higher standard of living than other workers in industrial settlements of the period. At the same time workers were bound to Lever’s factory.

Lever also promoted art at Port Sunlight and founded the Lady Lever Art Gallery which today holds a superb collection of 18th and 19th century British paintings and includes an introductory exhibition on Lever with original paintings commissioned for the Sunlight Soap Brand on display. Highlights in the gallery include Whistler, Etty, Constable, Turner (‘The Falls of Clyde’ is at Lady Lever) and renowned Victorian painters Rossetti and Millais.

Before William Hesketh Lever built his Port Sunlight Village on the Wirral, the site was a mass of marshy ground. However, it had what he needed for his factory including excellent transport links – both a river and railways – for bringing in his raw materials. By 1888 the ‘garden village’ Port Sunlight was founded and today it is very much preserved in its Victorian splendor as it was then. The village still sits within its original boundaries and is cared for by a Trust which also manages the Port Sunlight Museum.

Find out about the very first Port Sunlight villagers in the late Victorian/early Edwardian periods within the Port Sunlight Museum. Fascinating detail emerges from both the introductory film and exhibits including Lever’s particular skills in advertising and design. The Sunlight Soap brand, embellished with his choice of endearing sentimental small children and pets was a winner from the start. 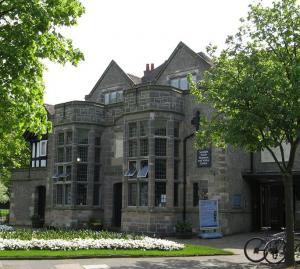 Exhibits explore the many social clubs and leisure pursuits undertaken in Port Sunlight and detail Lever’s emphasis on the importance of education, leisure time and the appreciation of art and culture for all. Due attention is also given to the fact that if workers left their jobs they lost their homes, but most stressed that here in Port Sunlight they had access to facilities and leisure pursuits that they could not enjoy elsewhere. The facts speak for themselves. In 1909 the infant mortality rate in Port Sunlight was 70 per 1000 live births compared to a national average of 119 per 1000 and in Liverpool 140 per 1000.

Port Sunlight was also one of the first villages to have electricity supplied by the factory’s own power station. Head off on the village heritage trail to discover the many beautiful historic buildings including Christ Church, the Lever Memorial, The Lyceum and Gladstone Theatre as well as Lever House itself, still a working building and factory producing the well known Unilever brands.

An interactive scale model of the village is also within the heritage centre, and kids can design their own Port Sunlight house or soap packaging. Original packaging for Sunlight Soap and other early Lever products features in exhibitions alongside unknown facts such as Lever providing free Sunlight Soap for Scott’s Antarctic expedition. Discover a fabulous selection of gifts, cards and soaps in original packaging in the museum shop and don’t miss the annual free entry Port Sunlight Festival annually in September – the event is one of the biggest on the Wirral. 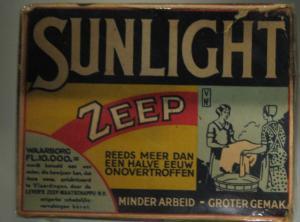 Exhibits within the Port Sunlight Museum

Renowned for its collection of fine and decorative arts, the Lady Lever Art Gallery opened in Port Sunlight in 1922. Designed by Geoffrey Owen, the younger son of William Owen, W.H. Lever had the gallery built as a memorial to his wife who died in 1913 and to whom, Lever always claimed, was the very source of his inspiration and ideas. The eclectic mix of art on display here at Lady Lever is derived from Lever’s personal collection. His original inspiration for collecting art from the 1880s was the use of images for advertising his Port Sunlight soap. Within the basement of the gallery you can view original paintings commissioned by Lever for the soap brand including the distinctive fisherman images used for Lifebuoy soap and the Puppy Love Series for Sunlight Soap. He soon went on to amass a huge art collection, buying complete collections from other distinguished collectors.