Cheddar Caves and Gorge is one of the most visited attractions in the UK. Cheddar Caves attracts most visitors where you can go underground and explore these fantastic natural formations. There are several other attractions as part of the complex that explains the history of the caves or where you can get some fantastic views of Cheddar Gorge and the surrounding Mendip countryside. If you want to experience rock climbing or caving for yourself, an outdoor activity centre at the caves provides guided instruction.

Cheddar Gorge is Britain’s largest gorge. It cuts through limestone in the Mendip Hills just outside Cheddar village. It is considered one of Britain’s greatest natural wonders attracting huge numbers of visitors annually. The gorge is covered in species-rich limestone containing varied and rare plant species that are excellent food plants for butterflies and insects. It is also the only place you’ll find the delicate flower, the Cheddar Pink. Heath, pockets of woodland and scattered scrub also occur that provide homes for dormice, the feral goats and birdlife like peregrine falcons and ravens.

The two great showcaves at Cheddar include Cox’s Cave and Gough’s Cave. These were discovered in 1837 and 1903 respectively by local men. The caves are named after their discoverers. Gough’s Cave is the biggest but Cox’s Cave has more intricate rock formations. Here you can see the effects that water has on limestone when it erodes and makes intricate wavy shapes in the rock with stalactites and stalagmites pointing into mirror-like pools. Some of the limestone is coloured with oranges and reds which comes from the minerals in the rock.

The caves and gorge are also important for wildlife. Rare horseshoe bats roost in the caves although you won’t often spot them during the day. Don’t let this put you off though as the bats are often out of the way of visitors as they roost high up, hanging off the rock. If you keep your eyes peeled you just might catch a glimpse of these extraordinary and interesting creatures. Some of the staff at Cheddar Gorge are actively monitoring the bats to find out how they use the caves and how they can conserve them alongside the visitor attractions. Above ground the grassland on the limestone of the gorge is also important containing varied and rare plant species that are excellent food plants for butterflies and insects. It is also the only place you’ll find the delicate flower, the Cheddar Pink. Some of the proceeds from ticket sales at Cheddar Caves goes into conserving the cave systems, the gorge and its very special wildlife – so you can feel good about helping conserve these fantastic natural wonders while having a fabulous day out.

You are guided around Gough’s cave with an audio guide that tells you how the caves were discovered and what you can see within them. (These are available in several languages). There are options you can choose for more information or other material specifically recorded for children. The audio guide will point out particular point of interest that you may otherwise have missed. You’ll smell the Cheddar Cheese maturing in the caves before you see it! 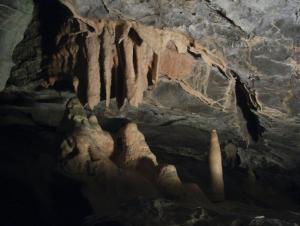 In 1903 Cheddar Man was discovered in Gough’s Cave – it is the oldest, most complete skeleton to have been discovered in the UK and has been dated 9,000 years ago. Ice Age rock art has also been discovered in Gough’s Cave. A barely perceptible drawing of a mammoth was discovered at Cheddar. It is only the second piece of representational cave art found in Britain. The discovery is exciting because many of the cave’s surfaces were damaged in the excavation of the cave system and the humidity in the caves is not conducive to pigments being preserved. The mammoth is partially engraved into the rock and has been dated at around 13,000 years old! See it for yourself on a tour of Gough’s Cave.

In Cox’s Cave an audio commentary points out all the colourful rock formations as you work your way around. The formations in this cave are more intricate and often brightly coloured with creamy colours and oranges formed by the minerals leaching out in the water as it drips over the rock surface. Cox’s Cave also includes the Crystal Quest for the children, but can make the adults jump too! 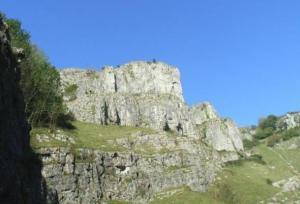 There are a variety of walks around Cheddar pushing into the Mendip countryside. A popular walk is at the top of Jacob’s Ladder – 274 steps up the gorge side to the Lookout Tower and the start of the Cliff-Top Gorge Walk. You can follow the trail on top of the caves looking down onto Cheddar Gorge with some excellent views of the Mendips and the Somerset countryside. With your entrance fee to the caves you’ll get a leaflet showing the trail above the gorge that takes you all the way around into Cheddar Gorge Nature Reserve. Along the way places of interest are highlighted including Pulpit Rock and the 450 feet Pinnacles – the highest point above Cheddar Gorge. The circular walk is a total of three miles and takes around two hours. It takes you along both sides of the gorge through Cheddar Caves Nature Reserve and the National Trust’s Cheddar Nature Reserve.

Cheddar Gorge is one of the few places in the country where you can just turn up and go rock climbing, abseiling or more adventurous exploration of Cheddar Caves by caving beneath the Mendip Hills. Cheddar Gorge X-treme are based at Cheddar Caves and Gorge and offer training on rock climbing, abseiling and adventure caving. For climbing and abseiling instruction you get to climb up a 50 foot rock face in Cheddar Gorge itself. The caving instruction is led by a National Caving Association qualified Caving Leader, through a system of “wild” caves beyond the caverns of Gough’s Cave. It is best to book in advance and you can hire all the equipment needed.