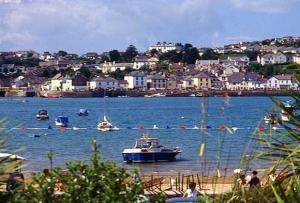 Quayside village Appledore alongside the River Torridge in North Devon

The picturesque quayside village of Appledore in North Devon nestles on the west bank of the tidal River Torridge at its confluence with the River Taw, only 4km from Bideford Bay just to the north west. The village with its beautiful network of narrow streets lined with independent shops, old inns, charming cottages and guest houses is a popular holiday base and day trip. Its fishing heritage stretches back to the 14th century, and during the Elizabethan era Appledore along with Bideford were major sites for the import of tobacco and the popular haunts of smugglers. The village contains some wonderful historic B&Bs and fisherman’s cottages with magnificent views of the estuary. It’s the perfect quiet and idyllic base for exploring North Devon, within walking distance of best sandy beaches at Northam Burrows and Wesward Ho!, and a gateway in to the heart of North Devon with its ancient market towns. South West Coast Path walking is right on your doorstep, and the Tarka Trail walking and cycling route is only around 2 miles from the village.


Fishing boat trips or pleasure cruises are widely available from the quayside around the river estuary and up to the coast. A regular ferry service runs across to Instow, and guided walks are usually available in peak summer season exploring the village’s fishing and smuggling heritage, and still thriving small shipbuilding industry. Relax on the quayside and sample Appledore’s own Hocking’s ice cream, and stroll leisurely around the village browsing art galleries and gift shops selling locally crafted ceramics, jewellery and seaside souvenirs. Activity centres also feature in the area offering water and land based activity programmes for groups and individuals, and there is a little maritime museum and lifeboat station in the village centre. Appledore also has a great acoustic live music scene, with many of its freehouse inns offering weekly Blues, Jazz and Folk live music entertainment along with best food and real ales.

Rich in maritime heritage, Appledore and the Taw and Torridge rivers have a fascinating seafaring and shipbuilding history. Visit the North Devon Maritime Museum in the village to find out more. The museum features an interactive video display plus seven galleries with exhibits on topics including World War II beach landing experiments, maritime, tourism, shipwrecks and sailing/ steam vessels. A little gift shop is also on-site. The Appledore Lifeboat Station houses two lifeboats and a boarding boat, and is open to visitors during the summer, offering an opportunity to learn about the work of the RNLI.

Bustling Appledore Quayside is the village hub where you can pick up the Instow Ferry service across the River Torridge estuary – sailing times are around 2 hours each side of high tide. Pleasure cruises and fishing boat trips are also widely available. Families love crabbing on the quayside and you’ll find a wide choice of restaurants, cafes and award-winning ice cream parlours on the waterfront.

The annual Appledore Book Festival is a family-friendly event celebrating literature, held in late September and early October with readings, performances and talks by some of Britain’s most popular authors and illustrators. Appledore is also a real centre for live music with a choice of venues in the village offering regular live music. The Beaver Inn on the shoreline of the River Torridge is the home of the North Devon Jazz Club – enjoy great music, delicious food and ales plus fantastic sea views here!