A view of the magnificent Ribblehead Viaduct from the Settle-Carlisle Railway has thrilled many a day tripper on this Great British Railway Journey which regularly features in TV documentaries on the Yorkshire Dales. See glorious views of the Three Peaks and down into Dent Dale as steam trains come out of Blea Moor tunnel on the approach to Garsdale. Twenty viaducts and 14 tunnels feature along this classic Yorkshire heritage line, widely regarded as England’s most scenic railway.

Step back in time on the North Yorkshire Moors Railway running through the heart of the National Park from Pickering to Whitby, stopping at beautiful historic stations along the way including Goathland, fictional village in the TV Series ‘Heartbeat’. Special events on this Yorkshire railway are superb and include great themed decade weekenders, steam galas and special themed events for children from a Witches & Wizards Week to Santa Specials. 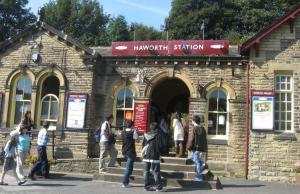 The ‘Railway Children’s Railway’, West Yorkshire’s Keighley & Worth Valley Railway from Keighley through Bronte Village Haworth on to Oxenhope starred in the 1970s film classic ‘The Railway Children’. The standard gauge branch line runs for 5 miles through the beautiful Worth Valley into the heart of Bronte Country. Events through the year are superb featuring an annual Railway Children Weekend, Diesel Galas and Steam Spectaculars, a Beer & Music Festival and popular Santa Specials. The railway is also a major attraction in the many festivals and events at Haworth village including the popular 1940s weekend annually in May.

The Esk Valley Railway steams across the northern edge of the North York Moors for 35 miles from maritime Whitby to Grosmont (where you can connect with the North Yorkshire Moors Railway) then west to Danby (home to The Moors Centre). The line then pushes onwards into Captain James Cook Country at Great Ayton and Middlesbrough. The Esk Valley line recently featured in the Daily Telegraph’s ‘Top 10 Romantic Rail Journeys in Britain. Mobile parties with music and a real ale bar run regularly in peak summer season.

The popular Wensleydale Railway is a real survivor running for 16 miles from Leeming Bar to Redmire, with stops at Bedale, Finghall Lane and Leyburn. A gateway into the Northern Dales and incredibly popular with holidaymakers, the route features many attractions along its 16 miles including best Dales Markets at Leyburn and Bedale. Onward bus links run to Bolton Castle and Aysgarth Falls from Redmire station and by vintage bus from Redmire to Hawes for the Wensleydale Creamery, Gayle Mill and the Dales Countryside Museum.

A real day out to remember, the Embsay & Bolton Abbey Steam Railway near Skipton is an award-winning family attraction. Many visitors combine their trip on the railway with a day out at Bolton Abbey. The route follows the old Skipton-Ilkley Line and runs for 4 miles from Embsay Station to Bolton Abbey Station. The 12th century ruins of Bolton Abbey and the many attractions within the estate are a scenic 1 1/2 mile walk from Bolton Abbey Station. Main station Embsay has a popular transport bookshop, free parking, cafe and gift shops. No need to leave the family pet behind – well behaved dogs are welcome too on this charming little railway running through beautiful Dales scenery. Special events include Fish & Chip and Strawberry Specials, a 1940s Weekend and Steam/ Diesel Galas. 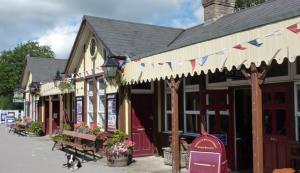 The Elsecar Heritage Railway near Barnsley is easily accessed off the M1, Junction 36 – just follow the Brown signs for Elsecar Heritage Centre. The little railway runs for around one mile between Rockingham Station at Elsecar through rural South Yorkshire countryside following the line of the Dearne and Dove Canal to Hemingfield. Stiff gradients are en-route, so it’s hard work for locomoties. Main station Rockingham has direct access from the Elsecar Heritage Centre and facilities onsite include a station buffet, a new toilet block, engine sheds and booking hall. Don’t miss great events like the Elsecar Heritage Festival in mid July. A recent addition to industrial wonders here is the magnificent Newcomen Beam Engine. Restoration on this important piece of industrial heritage is due for completion in 2014. 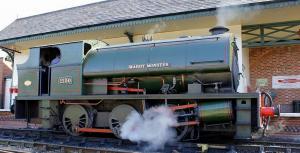 Fondly known as ‘Yorkshire’s biggest little railway’, The Kirklees Light Railway is a 15" narrow-gauge railway with 5 friendly themed engines – Hawk, Owl, Fox, Badger and Jay. Children will adore this great family attraction near Huddersfield in South Yorkshire. The main station is at Clayton West, and the line pushes through the foothills of the South Pennines to Shelly station with tea room and adjacent outdoor play area featuring a large picnic area and great country views. A cafe is at Clayton West and special events run through the year including Santa Specials, Days Out with Thomas, Olly Owls Big Weekend and Halloween Ghost Trains. Clayton West Station sits along the A636 Wakefield to Denby Dale Road, easily accessed off the M1, Junctions 38 or 39.

The North Bay Railway in Scarborough is one of Britain’s great historic seaside railways, in operation in the resort since 1931. A popular attraction with holiday makers, the railway’s route runs for about 3/4 mile from pretty Peasholm Park to Scalby Mills station with spectacular views of Scarborough’s award-winning North Bay along the way. A selection of attractions also feature along this seaside railway including a new Sky Trail Adventure, a boating lake, the glass house cafe and a historic water chute, one of only three surviving in the UK. Trains depart daily from Peasholm park. 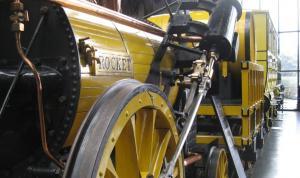 Replica of Stephenson’s Rocket at the National Railway Museum, York

Confirming Yorkshire along with the North East as UK heritage railway capitals, Britain’s National Railway Museum with free entry is situated in York. The NRM ranks as the world’s largest railway museum, taking visitors on a journey through 300 years of railway heritage. Explore the Great Hall with vast historic engines including iconic ones such as a replica of Stephenson’s Rocket. Off the Great Hall sit exhibition spaces displaying a wealth of railway memorabilia from old station signs to railway posters and constantly changing exhibitions. Talks, tours and family activities are year round.