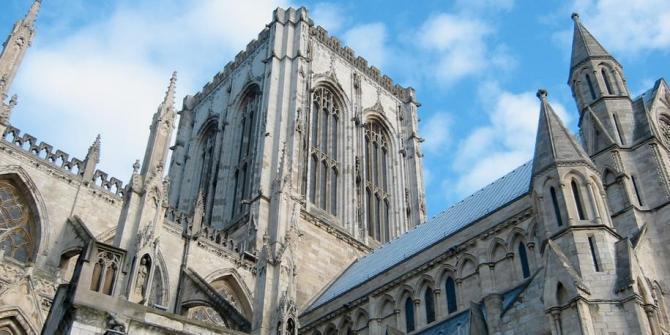 York Minster is the largest Gothic styled cathedral in Northern Europe and easily one of the world’s most impressive. From the intricate Gothic carvings of the Chapter House to one of the world’s best collections of stained glass, any visit to York Minster demands several hours. An excellent Minster Shop and cafe is on-site, with guided tours available and ever changing exhibitions.

A climb up York Minster’s tower steps (all 275 of them) is not to be missed. Along the way you’ll note the medieval pinnacles and gargoyles, then on the Minster rooftops be amazed by the spectacular views of the city of York and beyond to Kilburn and the Yorkshire Wolds.

There’s been a York Minster as far back as 627AD, although back then it was a small wooden church used to baptise the Anglo Saxon King Edwin of Northumbria. The site has survived invaders, fires and disputes – such as the long running struggle for primacy (settled in York’s favour in 1127) with Canterbury, with its similarly impressive cathedral. The spectacular York Minster you see today was constructed between 1215 to 1472. An architectural marvel both inside and out, York Minster’s Great East Window is the largest example of medieval glass surviving in England.

York’s historic buildings and architecture never fails to impress. Medieval architecture is particularly prevalent in the city, with most striking example York Minster alongside other medieval gems such as St Mary’s church and the medieval Merchant Adventurers’ Hall – a fine example of a medieval guild hall.

Push forward into the Georgian era and explore York’s spectacular Georgian townhouse Fairfax House on Castlegate. York’s Micklegate Bar city gates were a family home from 1196 up to as recently as 1918, and is today home to the Micklegate Bar Museum. Another hidden gem in York is the Roman Bath Museum beneath the Roman Bath Pub on St Sampson’s Square. On show here is both a Roman sauna and steam room.