Yell, Fetlar and Unst make up the Northern Shetlands. Known as Jala in the Norse sagas, Yell is now home to around 1000 people. It is often overlooked by tourists, despite good ferry links, with its dark and broody peat moorland not always seeming attractive at first glance. It was once a centre for fishing, whaling and trading with visiting merchants from other countries. Today many of the people living here have returned to a crofting lifestyle, their traditional way of life before Clearances for sheep rearing in the nineteenth century; although the nearby oil industry also supplements incomes and provides jobs for the islanders.

Yell is the biggest of the three Northern islands and is the second largest island in the Shetlands. It is characterised by its peaty moorland and deep voes – often a favourite hiding place for German submarines in World War II. Today it is better known for its abundance of otters that you have a good chance of seeing in daylight. The moorland is home to many wading birds in Summer and the cliffs provide niches for nesting seabirds particularly at Neapoback and Da Horse o’Burravoe.

There is a leisure centre in Mid Yell, the largest village as well as a couple of shops and post office. Cafes are found at the Old Haa in Burravoe, the Hilltop Bar in Mid Yell and the social internet/library cafe, Wind Dog Cafe, run by an opera singer, that doesn’t look promising from outside, is a great place to eat and meet people and also holds a variety of events throughout the year.

At Burravoe is the Old Haa Museum in the former whitewashed Laird’s house, built in 1672. Formerly this was the base for the Hanseatic League, a political and commercial association founded by Robert Tyrie that tried to defend their wares from pirate attacks. Unfortunately the pirates attacked the merchants’ stores in 1696 badly affecting their trading ability. Today The Old Haa is a Museum and Visitor Centre housing a local history museum, tea room, gallery and craft shop. 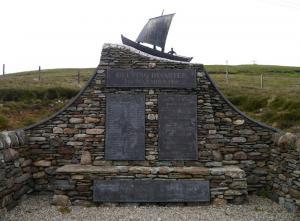 In the North of the island is the moving Gloup Memorial that commemorates fifty eight fishermen who were tragically drowned on the night of 21 July 1881.

If you walk south from the memorial south along the steep sided voe, then west to Burgi Geos, you’ll come to the remains of an Iron Age fort. Over on the west coast another Iron Age settlement has recently been discovered near Sellafirth at the Tafts of Bayanne.

Of course, Yell is a deeply inspirational place as can be seen by the fantastic wildlife photographs that were taken over Bobby Tulloch’s lifetime. A native to Yell, the late Bobby Tulloch was a naturalist, photographer, writer, storyteller, boatman, musician and artist. He first found breeding snowy owls on Fetlar and throughout his life produced thousands of photographs of Shetland’s wildlife, wrote several illustrated books and appeared on television.