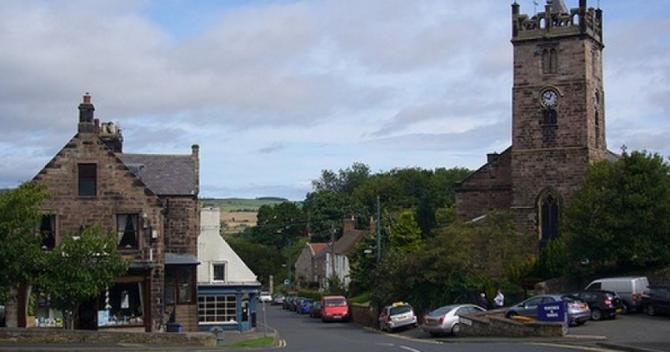 Wooler is a charming stone-built market town above Wooler Water, in the heart of the Glendale countryside in the Northumberland National Park. The Cheviots Hills are just to the west and the Northumberland Heritage Coast is within easy reach to the east (Alnwick is just over a 30 minute drive away). The town makes a great base for an outdoor activity holiday. Walking, cycling, rock climbing, fishing on the Tweed and Till, and horse riding are all popular in the area. The two long-distance paths – St Cuthbert’s Way and the Pennine Cycleway cut through the area and many attractions feature in the nearby beautiful Ford and Etal Estates.

The Cheviot Centre near the High Street is housed within an old Victorian workhouse and stocks a wide range of guides, maps and leaflets on North Northumberland, The Cheviots and local attractions. The Centre also hosts regular live music and events. Wooler’s High Street is a delight, lined with local food shops, independent stores, specialist outdoor clothing shops, historic country pubs and fine restaurants. The Fenton Centre offering a unique visitor experience on a real working farm is also close to Wooler.

The Chillingham Estate near Wooler with a famously haunted 12th century castle is open to the public and available for weddings. Chillingham Castle was used as a base-camp for the attack against William Wallace in 1298. The Long Galleries date from the Elizabethan period. England’s great landscaper Capability Brown, who was born not far from Wooler, designed the park at Chillingham in 1752. Find out more about Chillingham’s ghosts on a castle ghost tour! You can walk direct from Wooler to the beautiful woodland of Chillingham Park for views of the castle. The Chillingham Wild Cattle Park is also in the area.

Ancient Hill Forts and spectacular waterfalls such as Humbleton Hill Fort and Linhope Spout are popular walks around the market town. Other outdoor activities include local skiing when the snow falls on The Cheviots in winter and numerous cycling routes branch out into Glendale and The Cheviots from Wooler including the gentle family cycling route through the Milfield Plain. The long-distance St Cuthbert’s Way from Melrose to Lindisfarne also runs through the town. The final stretch from Wooler to Lindisfarne is around 28 kilometres and takes in the famous St Cuthbert’s Cave en-route near Greensheen Hill.

Yeavering Bell Hill Fort west of Wooler is also known as Ad Gefrin, the palace of the ancient kings of Northumbria. The site represents the largest of Northumberland’s Iron Age Hill Forts. In the Anglo-Saxon period it was one of the most important strongholds in England, site of a grand palace built by Anglo-Saxon kings. Evidence of earlier Neolithic presence has also been unearthed. A temple was once here and during the Bronze Age the dead were buried around Yeavering. English Heritage have been at work here and a heritage trail guides you around the site – pick up maps and guides at Wooler’s Cheviot Centre. 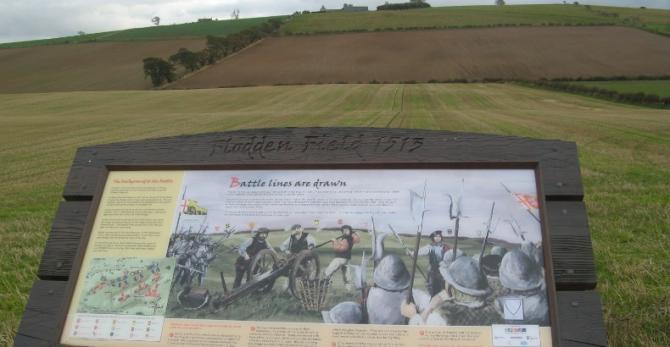 Battlefield sites where the English and Scots fought surround Wooler including Flodden Field 1513 near Branxton. The lesser known site of the Battle of Homildon Hill in 1402 between Northumbria’s army led by Henry Percy against the Scots Raiders led by the 4th Earl of Douglas is also nearby.