Ancient Winchelsea on the East Sussex Coast contains a fine selection of heritage medieval buildings, and along with nearby Rye (2 miles away), by the 13th Century Winchelsea had joined the big five original Cinque Ports when demand on them had grown too much. Winchelsea was relocated on inland Iham Hill when Old Winchelsea on a former spit was lost to the great Medieval storms between 1233 and 1288. Breathtaking heritage buildings in the town include St Thomas church, once the size of a mighty cathedral. The old Court Hall, today the town’s museum also survives and around the centre sit fine real ale inns, cosy tearooms and a selection of bespoke specialist shops.

Winchelsea Beach village is located just to the south of the ancient centre and features a quiet shingle beach flanked by a seawall along which you can walk whilst admiring glorious coastal views towards the Fairlight cliffs and inland views towards the rural High Weald. Windsurfing is particularly popular around Winchelsea Beach and you’ll find an outstanding selection of pretty cottages, family friendly holiday parks and caravan parks in the area. 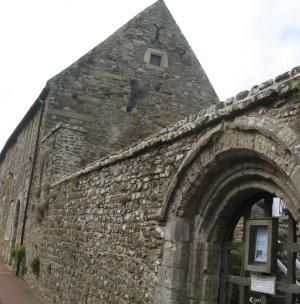 Founded in 1288 by Edward I, Winchelsea’s former position was on a shingle bank which once extended from Fairlight Head to Hythe. The legendary storms between 1233 and 1288, especially the big storm of October 1250 literally drowned Old Winchelsea, and when they rebuilt the town it was deliberately located on the raised inland Ilam Hill. A tour reveals a beautifully preserved medieval Bastide town with central ruins of St Thomas church – the southwest corner of the nave and damaged transpets, once thought to be the work of French invaders, is now thought to have been the work of church authorities themselves who were attempting to curb maintenance costs within a poverty strickent parish! Many buildings are Grade Listed – note the fine Medieval Strand Gate straddling the road when you enter Winchelsea. Other highlights include the Town Well, the New Inn, Blackfriards Barn and Greyfriars located on the former site of Winchelsea Market Square.

Peaceful Winchelsea Beach is a stunning stretch of shingle beach famed for its many birds and a picture-postcard scene of old shrimping nets and fishing boats. The shingle beach and seawall are long, stretching all the way to Cliff End and the start of the Royal Military Canal, onwards to Fairlight Cliffs and Hastings Country Park. 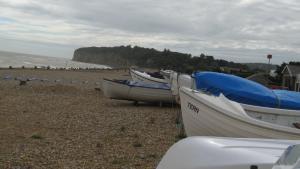 Things to Do & See

A wealth of beautiful landscapes surround Winchelsea – the town is the point where the High Weald Area of Outstanding Natural Beauty meets Romney Marsh. Hastings and 1066 Country are within easy reach. Walking routes directly accessible from the town include the Circular Winchelsea Walk from Winchelsea Station, the 1066 Country Walk and the Saxon Shore Way. Many footpaths sit around the town along with popular cycling routes like Rye Rides and a Circular Rye & Winchelsea cycle route. Rye Harbour nature reserve and Romney Marsh are also conveniently close. If you’re looking for the ultimate wildlife, walking and cycling escape on the Sussex Coast, Winchelsea is the perfect destination.

Easily reached from London and the M25, visitors heading to Winchelsea by car will find it a pleasent route via the M25 and A21 or the M25/ M20. Scenic coast roads put Winchelsea within a 30 to 50 minute drive of Dover and the Channel Tunnel. Winchelsea also has its own railway station with direct rail links to Ashford International, Rye and Eastbourne.