Housed in what was an old Captain’s Reading Room on Marine Parade and drawing closely on Bram Stoker’s novel Dracula, the Dracula Experience attraction in Whitby offers a unique, suitably gripping tour through the novel. Imagery and events stay close to the book, and the harbour setting of Whitby is at the very heart of the exhibit. The descriptions of Whitby are incredibly detailed in Stoker’s novel from the arrival of Dracula to Whitby harbour on-board the Russian ship Demeter to Lucy’s sleepwalking up the 199 steps to Whitby Abbey. Such scenes are given great detail in the attraction which is an ideal introduction to the novel and Whitby’s role in it. 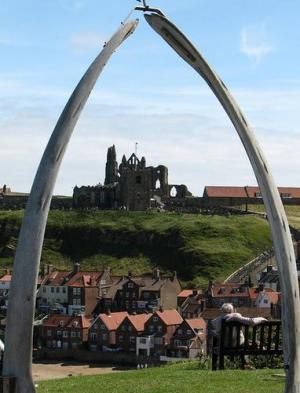 Right in the centre of Whitby on the west side of the river sits Whitby railway station where you can hook into two of Yorkshire’s best heritage steam railway journeys – The Esk Valley Railway and the North Yorkshire Moors Railway.

The North Yorkshire Moors Railway takes you on one of the most spectacular historic rail trips in the UK. Nostalgic diesel and steam engines weave right through the heart of the North York Moors from Whitby in the North to Pickering market town on the southern edge of the National Park. Station stops in the park are at Lewisham and a request stop at Newton Dale Halt on the edge of the scenic Cropton Forest area. A station is also at Goathland made famous as Aidensfield in the Yorkshire TV series Heartbeat. Hop off at Grosmont, a delightful 1950s rail junction and site for a display of historic locomotives, engine sheds and station cafe.

The Esk Valley line runs for 35 miles from Middlesbrough in the North East into the heart of Captain Cook Country around Great Ayton, chugging across the northern landscapes of the North York Moors National park via Danby, Grosmont and Sleights.

The beautiful Esk line runs through some wonderful picturesque stations. The little isolated station of Battersby on the edge of the North York Moors is where trains reverse and you’re touching railway history particularly on the stretch between 1950s Grosmont Station to Whitby. This stunning line was the engineering work of George Stephenson and dates from 1830. Hop off and on at any of the stations on-route. The Great Ayton and Kildale area is a popular spot for walking. Or hop off at Grosmont or Egton for a tour of the picturesque villages here which contain a choice of country pubs and specialist shops.

Why not join Storywalker Harry Collett – the Man in Black for a ghost tour (lasting about 75 minutes) around Whitby, starting at the Whale Bone Arch just opposite The Royal Hotel on West Cliff usually at 8pm. No need to pre-book – just turn up, walk in the footsteps of Dracula and listen to tales of murder and mystery. Harry also offers heritage town tours hosted by The Baron!