Maritime Whitby with its stunning Whitby Abbey ruins high up on a ridge overlooking the coast, (the ruins are still used as a navigation marker by shipping), is the perfect coastal holiday destination if you like a little history mixed with your seaside break.

Situated high on the cliff headland above Whitby town centre, the ruins of Whitby Abbey are the town’s iconic emblem. The first Abbey recorded here was in 657 AD, originally containing the shrine of St Hilda, the founder of the Abbey who died in 680 AD.

The ruins you see today date from around 1220 AD. Famed for its links to Victorian author Bram Stoker and his novel ‘Dracula’, Whitby also has links with the first of the Saxon poets – Caedmon who lived and worked here. Find out more in the on-site Whitby Abbey Visitor Centre. 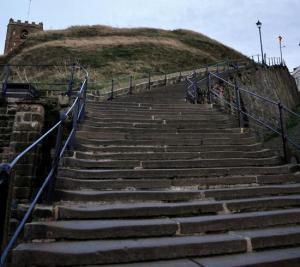 The 199 Steps up to St Mary’s Church & Whitby Abbey

Whitby Abbey saw less destruction than others during Henry VIII’s dissolution, although the structure was later plundered by the Cholmley family who built a mansion adjacent to the abbey. This mansion now serves as the visitor centre.

The site is archaeologically fascinating, with evidence unearthed of a large settlement up here as well as the abbey being the site for Northumbrian royal burials. The visitor centre pays due attention to the multi-layering of this site which has revealed not only Anglo-Saxon treasures but also a 17th century ‘hard garden’ built by Cholmley which has been restored.

Climb up the famous 199 steps to Whitby Abbey to emerge at one of England’s most spectacularly situated abbey ruins. The views from the cliff top are simply breathtaking! The steps are the only way up from Whitby Harbour, but you can also access the Abbey via signposts off the Whitby to Robin Hood’s Bay road.

Destroyed by Vikings, revived by knights under William the Conqueror – Whitby Abbey has consistently changed hands and all have left their mark. Visit the on-site visitor centre for a comprehensive history. Always a concern is the erosion of the coastal cliffs in the area and that the site is shifting closer to the sea!