What to See & Do in West Yorkshire

West Yorkshire is Yorkshire’s cultural and literary heart. The county’s two largest cities – Leeds and Bradford – sit within West Yorkshire, served by major gateway into Yorkshire, Leeds Bradford International Airport, which sits midway between these two dynamic cities. West Yorkshire is a hub for numerous themes. The National Media Museum in Bradford is a UK centre for film, photography, TV and media, whilst largest city Leeds is one of the UK’s best cities for shops, museums and acclaimed art galleries, particularly sculpture at the Henry Moore Institute. 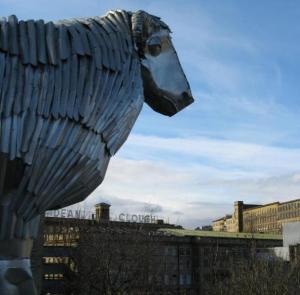 Large towns like Huddersfield and Halifax with their spectacularly preserved Victorian architecture and cutting edge arts centres also sit within the West Yorkshire region. To the south just outside Wakefield sits one of the world’s best centres for sculpture – The Yorkshire Sculpture Park which boasts numerous pieces by both Henry Moore and Barbara Hepworth and award-winning gallery, The Hepworth Wakefield completes the world class ‘sculpture triangle’ right here in West Yorkshire.

West Yorkshire is a literary mecca for huge numbers of visitors from around the world heading to Bronte village Haworth home to the Bronte Parsonage Museum, set within the stunning moorland of Bronte Country. South of Haworth is the birthplace of poet Ted Hughes – Mytholmroyd. West Yorkshire is also a centre for Yorkshire industrial heritage, particularly textiles. Highlight historic sites, museums and attractions include World Heritage Site Saltaire village and the mighty Salts Mill near Bradford, the Bradford Industrial Museum and Leeds Industrial Museum at Armley Mills. Many of West Yorkshire’s largest historic mills are now new exciting arts centres and galleries including Dean Clough in Halifax and Salts Mill at Saltaire.

Industrial legacies such as the canals in the region including the Leeds Liverpool Canal, the Rochdale Canal and the Huddersfield Narrow Canal all now offer scenic narrowboat trips, stunning canal towpath walking and canalside heritage centres such as the Standedge Tunnel & Visitor Centre in Marsden near Huddersfield. A wealth of pretty villages serve as walker bases and hubs for arts and crafts shopping in a region which is as famous for its rugged moorland countryside as for its cities.

Village hotspots include Holmfirth in the West Yorkshire Pennines, centre for the popular ‘Last of the Summer Wine’ series. The breathtaking scenery and walking territory of the Holme Valley and high moorland of the Yorkshire Pennines offers a choice of walking trails including the Pennine Way National Trail which weaves across Keighley Moor passing Top Withins associated with Emily Bronte’s Wuthering Heights. The Calderdale Way walking circuit is another popular West Yorkshire walking trail taking you through some of the areas most spectacular countryside and historic industrial sites around Todmorden, Hebden Bridge and Elland near Halifax.