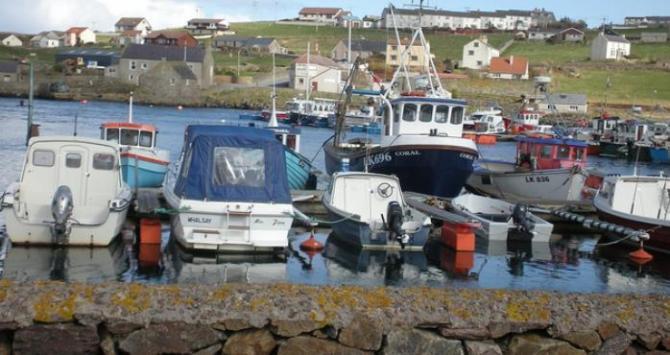 Named Bonnie Isle due to its fertile land and abundant peat, being five miles long by two miles wide, and largely a multi-million pound fishing community, Whalsay is one of the more populated islands in the Shetlands (about 1000 people). Fishing and crofting support the population. Whalsay’s a good place for some easy coastal walking and being named Whale Island by the Vikings you might see a few breaking the waters on the short ferry trip over. Whalsay is easily accessible from Mainland Shetland.

The attractions of the island lie in the wildlife, archaeological sites and historic buildings around the harbour. The island also boasts Britain’s most Northerly official golf course which welcomes visitors – just mind the planes from the airstrip that might put you off your game! The Oot Ower Lounge restaurant and pub at Livister is the only place to eat on Whalsay so you’ll need to book ahead if you want a full meal at lunch or dinner. The Whalsay Boating Club in Symbister also has a bar that welcomes visitors. The island also has a shop and leisure centre with heated swimming pool.

The harbour at Symbister is the centre of the island and where visitors arrive by ferry. It is often dominated by one of the huge locally owned pelagic super trawlers that are some of the biggest in Europe. But Symbister Harbour still retains some of its historic feel evoking a time when Germans of the Hanseatic League sailed to Whalsay’s to trade tobacco, seeds, cloth, iron tools and luxury goods for Whalsay’s salt fish. Pier House, one of the Hanseatic merchants’ stores (now a museum) tells the story. As you’d expect from a sea trading island, there was also an underground smuggling trade going on and it is believed a smuggler’s tunnel ran under Bremen Strasse – the road outside the booth – to the cellars of the Auld Haa, the former home of Bruce lairds who spent much of their time having acquired Whalsay in oppressing the island’s inhabitants over a 300 year period.

Symbister House, the New Haa, is the granite Georgian mansion with Neoclassical portico that stands proudly on the hill overlooking the harbour. This was built in 1830, using forced local labour, at great expense by Robert Bruce almost bankrupting the family. This was an intentional ploy on Bruce’s part as he wanted to deny the family fortune to his heirs! It has been used as a school since the 1940s. 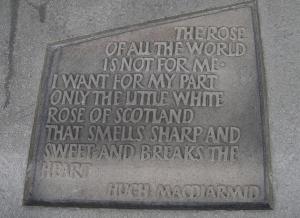 Half a mile east of Symbister is Sodom, an anglicised corruption of Sudheim. This is where Scotland’s most influential poet spent nine years of his life and where he produced much of his best poetry at Grieve House.Hugh MacDiarmid, (real name Christopher Murray Grieve), came to Whalsay after serving in the First World War, aiming to revive the Scottish language in poetry in order to assert Scotland’s artistic independence from England. He eventually left the island having been reluctantly conscripted to work in a munitions factory in Glasgow. He never returned.