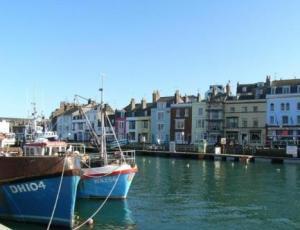 Weymouth Harbour is a busy harbour at the heart of Weymouth’s Old Town, which retains much of its historic seafaring character, particularly along the seventeenth century waterfront. Visitors might like to explore by picking up the Heritage Trail which points out some of Weymouth Harbour’s historic sights and stories – including tales of the Black Death, the Spanish Armada and the Civil War. This 17th century harbour is one of Europe’s prettiest, and has a good choice of restaurants, fine pubs and shops, including chandlers flanking the waterfront, making it ideal for visiting pleasure craft. All the town’s shops and attractions are only a short walk away. A choice of boat trips and cruises around Dorset’s Heritage Coast depart from Weymouth Harbour. Visitor berths also provide a welcome stopover for boats cruising the South Coast and making the crossing over to the Channel Islands and Northern France.

Weymouth Harbour is acclaimed for its fresh seafood including crabs, lobster and a range of sea fish landed daily. The harbour hosts the Dorset Seafood Festival annually across a weekend in July. A fabulous event and one of the UK’s largest food festivals, the Dorset Seafood Festival attracts huge crowds and features a range of attractions along the old harbourside including seafood cookery demonstrations by famous chefs, competitions, street food and free pop-up music and film entertainment.

On the South East side of Weymouth Harbour is the Nothe Peninsula where you’ll find Weymouth’s Nothe Fort. The Fort was built in 1860 to defend Portland Harbour and housed a 12 gun battery of canons. The Fort is now a museum dedicated to coastal defence and contains seventy rooms of exhibits looking at Weymouth at war and the Royal Navy’s links with the town, as well as ancient historic events in the Dorset area such as the Roman invasion.

North of the harbour is Radipole Lake RSPB reserve – a large reedbed and lake that’s excellent for a spot of birdwatching. Cetti’s warblers and bearded tits can be spotted all year round. In Autumn you never know what you’re going to see as the reserve attracts a range of migrating birds and bitterns. There is also a Visitor Centre on site with accompanying viewing shelter and hide. You can also grab a snack and hot drink or browse publications in the shop. The reserve sits alongside Weymouth cycle route one and is just a short walk from Weymouth train station.