Weston’s Beach is the main attraction during the summer. It is a massive stretch of sand great for beach games, kite flying, soaking up the sun, donkey rides, sandcastles and watersports. It is divided into different zones to accommodate everyone. Pick up beach leaflet guides from the Tourist Information Centre showing which parts of the beach are allocated for what uses. Cheap deck chair hire is also available. There is seafront parking and a motorcycle parking area outside the Tourist Information Office.

The central part between the Grand Pier and the end of Marine Parade is the main family area and dogs are not allowed in this area. Dogs are allowed on the beach between Royal Sands and Uphhill and between the Grand Pier and Knightstone. The beaches are not supervised by lifeguards so you need to keep children under supervision and keep an eye on beach safety information. During the summer Weston Welcomers are on hand along the seafront who offer help and advice so you can make the most out of your visit. Wind surfing and yachting are restricted to the southern end of the beach where there is a "Windzone" area. This is also where you’ll find Weston Yacht Club next to the Golf Club. There is a marine lake at the northern end of the beach so you can take a dip even when the sea is right out.

Another annual event is the Weston Beach Race a Motorcross Enduro event usually held in October. This has grown into the largest off-road motorcycle event in the UK, and one of the largest in the world. 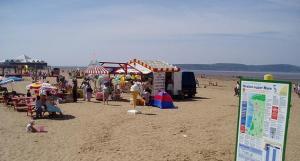 The Grand Pier at Weston-Super-Mare

Award-winning Weston-super-Mare’s Grand Pier was built after the Birnbeck Pier, the Old Pier, to attract visitors nearer to the town. It had become fashionable for resorts to have piers to bring in visitors from the paddle steamers and prosperous resorts all over the country were trying to build bigger and better piers. Weston’s Grand Pier opened in 1904 and had a music hall theatre at its end. It was one of the last piers built between the early 1800s to early 1900s. Unfortunately the theatre was destroyed by fire in 1930. It also had a bandstand in front of the theatre. The pier is over 1,000 feet long and had been planned to be even longer with a jetty for paddle steamers. The high rise and fall of the sea at Weston put paid to that idea and it was dismantled when it was found to be dangerous to use.

Newly restored after a fire destroyed the Grand Pavilion in 2008, Weston’s Grand Pier is the tour de force of British piers, retaining all its Edwardian glamour whilst at the same time offering modern cutting edge facilities such as state-of-the-art conference and wedding facilities and event and entertainment space. Open daily and free to enter, Grand Pier is crammed with fun thrills for all the family including first class rides and attractions including classic dodgems, F1 simulators, go-karting, a ghost train, 4D cinema and Britain’s smallest rollercoaster – Robocoaster. Alongside fun family rides and attractions sit a fantastic selection of eateries including an Edwardian tea room, family cove cafe, pitstop cafe, fish & chip takeaway, bar and American themed ice cream parlour. Year round events and entertainment include Ghouls Balls, fireworks evenings, Santa’s Grotto and Party on the Pier events with live DJs.