West Cornwall is Britain’s magnificent seascape corner with its own unique light, a bright illuminating light which famously attracted artists like Barbara Hepworth to the area. Hepworth, Ben Nicholson and others set up an artist’s colony in St Ives and their work is on show at the Tate St Ives on Porthmeor beach and the Barbara Hepworth Museum and Sculpture Garden housed within her former studio in St Ives. Great coastal landmarks and spectacular beach bays are numerous around Cornwall’s west coast. The most beautiful include Porthcurno west of Penzance, overlooked by the open air Minack Theatre high up on the cliff and in the far west family friendly Sennen Cove beach near Land’s End.

Spanning a short distance across, West Cornwall thins down to headland size at Land’s End and as you’re never far away from it, the coast takes centre stage here with majestic Cornish mining remains running along the jagged coastline around St Just. St Ives isn’t West Cornwall’s only centre for art. The pretty fishing villages of Newlyn and Mousehole near Penzance are former haunts of the Newlyn School of Art – see their work on display at the Penlee House Gallery in Penzance.

Places to Stay near Sennen Cove

The climate is warm down here in the far south west, and Penzance has a rather exotic feel – don’t miss a tour of the Victorian Morab Subtropical Gardens or a swim in the truly magical outdoor lido – the Art Deco Jubilee Pool. Boat trips run regularly from Penzance harbour to the off shore Isles of Scilly either for a stay or day trip. These far south western islands also have an exotic flavour with their tropical gardens and crystal clear waters. The perfect romantic retreat, the Isles of Scilly with main island St Mary’s offer a wealth of magical beaches, coastal walks, wildlife boat trips and cycle trails. 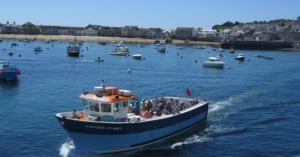 Boat trips from Penzance to the Isles of Scilly

Choose from hundreds of holiday cottages and stylish beachside apartments in West Cornwall. The region also contains numerous family run B&Bs including beautiful Victorian guest houses in Penzance and boutique B&B boltholes around St Ives. Many B&Bs, cottages and apartments in the far west boast panoramic sea views and you’ll find a great choice of low cost quality holiday parks and sea view cottages in the Hayle area close to family friendly beaches. Character and luxury are key features in accommodation dotted around this area of Cornwall with some charming renovated fisherman’s cottages available, many of which welcome pets.