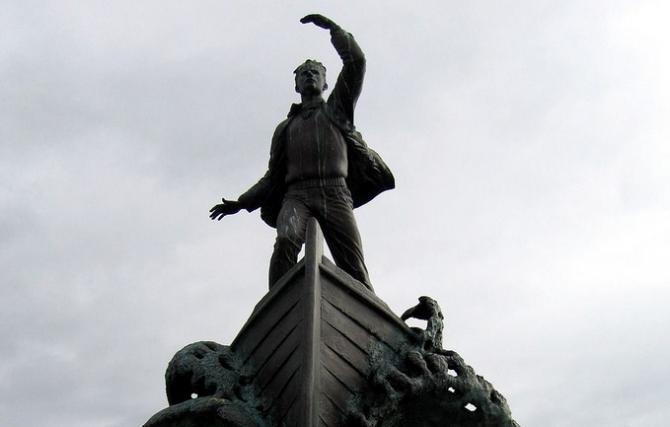 The role of the Shetland Islands in the twentieth century’s two World Wars cannot be understated.

The Norwegian naval ‘Shetland Bus’ began in Lunna and Scalloway, directing naval operations off the Norwegian coast. Covert trips (perhaps 200 in all) were made. Leif Larsen led these operations and his huge number of military decorations testify to their success. Several RAF bases were also established at Sullom Voe and several lighthouses suffered enemy air attacks.

Many Shetland men signed up with the Gordon Highlanders and other military units, and fought bravely, but operations and the war time took its toll – Shetland’s losses numbered over 500.

Travelling towards Laxoon North Mainland, you’ll find The Cabin, a collection of wartime memorabilia assembled by the owner, Andy Robertson. When the flag is flying it is open to the public.

Also on North Mainland and three miles north of Vidlin is the listed Lunna House dating from 1663. Its claim to fame is as the first Norwegian Resistance’s base for the Shetland Bus operations during World War II. It continued to have a role during the war as a base for the planning and execution of submarine raids to sink German battleships. Today the house has been restored and has been featured on several television programmes.

Down the hill is Lunna Kirk, a small chapel built in 1753. Note the "lepers squint" on the outside wall which was provided for those who had a hereditary skin condition (caused by malnutrition, not leprosy), so they could watch the services going on inside. Several unnamed Norwegian sailors are buried in its cemetery – they were torpedoed by the Germans in wartime.