Blackship off the Churchill Barrier

The contribution that the Orkney Islands made to twentieth century wartime success should not be disregarded. Some sites still remain which are worth a visit to soak up the atmosphere of war times gone by.

Scapa Flow in particular, being naturally sheltered by the Orkney islands that surround this sea area, historically has been well-used for military exercises, and played a strategic role during the two World Wars.

During World War II the seas between Mainland, Burray and South Ronaldsay were ringed by the Churchill Barriers. Mainly built with 50,000 concrete blocks by Italian Prisoners of War over four years, they were erected after the Royal Oak disaster. During World War 1, blockships were sunk to protect the islands but these shifted with the tides, making the area vulnerable – and the Germans mounted an attack in 1939. At this time there were 50 British battleships moored in Scapa Flow. The Royal Oak was a victim of this attack – it was hit and sank within 15 minutes with the loss of 833 crewmembers. So the Churchill Barriers were created to seal off the Eastern entrance to Scapa Flow. Many of the blockships and wrecks are still visible now. 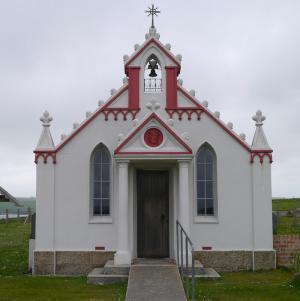 Just across Scapa Flow to Burray, the Italian Chapel was created by Italian prisoners of war held at Camp 60 while working on the Churchill Barriers. The prisoners used what they had to make paths, chapel and statues – mainly from concrete and barbed wire.

With a serene atmosphere, the symbolism and stark beauty of the site stand in stark contrast with the wall and roof paintings and the inspirational colours etc.

The chapel is usually open during daylight hours and still carries out services. Some of the paintwork was restored by Chiochetti (one of the prisoner/artists most largely involved) in 1960 when he returned for a BBC programme. It is a truly inspiring and touching story and a peaceful, yet thought-provoking place to visit. 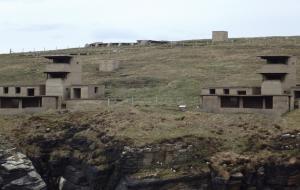 In the Howe of Hoxa bay, is a ruined broch, the Wart (a chambered cairn) and a good circular walk around the Dam of Hoxa to St Margaret’s Hope. But there are also several buildings left from both World Wars, including several gun mounts and the Second World War Balfour Battery.

The nearby island of Flotta is also rich in World War history, being right at the centre of Royal Naval anchorage during both wars. The Isle of Sanday was also used in World War II for the location of a massive soldier’s camp. A radar station was built at Lettan in 1941 and in the north of the island you can still see the remains of many bunkers around North Loch.