Torquay and the English Riviera have one of the highest numbers of award-winning Blue Flag beaches in the UK. The 22 mile long coastline contains 20 magnificent beaches and coves, with top beaches in Torquay and Babbacombe including Meadfoot, Torre Abbey Sands, Babbacombe beach and Oddicombe beach. 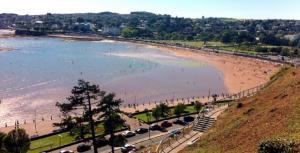 Central Torre Abbey Sands beach is the biggest of all Torquay’s beaches and popular with families. Abbey Sands has warm shallow waters and a long sweeping stretch of golden sandy beach bay. It’s conveniently situated close to Torquay town centre, harbour and shops so all amenities are close to hand, with easy access to Torquay promenade and nearby parking.

Corbyn Head beach is a family favourite beach in Torquay, situated just south west of Torre Abbey Sands and with a quieter atmosphere. A charming beach lined with pretty painted beach huts, Corbyn Head is a sand and shingle beach popular for rock pooling with easy access to nearby Abbey Meadows and Torre Abbey Gardens.

Meadfoot Beach with dive school is just east of Torquay town centre and was a popular swimming beach with Agatha Christie who swam here as a child practically every day in the summer! Meadfoot Beach is relatively large and has superb views of the Torbay coastline and across to off-shore Thatchers Rock. Meadfoot is a mix of pebble and sand, and as the tide goes out rocky areas are exposed so at low tide it’s great for rock pooling! Diving is also popular and you’ll find a dive school flanking the beach. Meadfoot is well equipped with a great terraced cafe, public toilets and a shop, as well as a scattering of beach huts, with deck chairs available to hire.

Situated just beyond Torquay and Babbacombe, peaceful Watcombe beach is a Riviera beach cove gem. Dogs are welcome on Watcombe Beach all year round and Watcombe is accessed by a steep path down from the cliffs through mature woodland on the hillside before emerging at the cove beach. Lifeguards, a cafe and toilets are all available across the summer season.

The perfect peaceful beach retreat, beautiful Maidencombe Beach around Torquay also sits beyond Babbacombe to the east of Torquay and is surrounded by countryside. Accessible via a narrow path, Maidencombe is a sandy beach offering safe bathing. Dogs are welcome all year round and just up from the beach, the South West Coast Path along this stretch of the Torbay coastline is particularly stunning.