Torquay attractions guarantee a fun packed holiday. The resort features some of the English Riviera’s most popular attractions including coastal zoo Living Coasts and the fascinating Kents Cavern Prehistoric Caves. Take a tour of the Torquay Museum with Agatha Christie exhibition and regular film screenings of Christie performances from TV and the big screen. Adults and children alike will enjoy great indoor all weather attractions in Torquay like Dinosaur World with awesome life-sized dinosaurs and the Waves Leisure Pool with slides, inflatables and water play activity centre. Hop aboard a pleasure boat cruise along the English Riviera coast and explore attractions further afield in Riviera neighbours Paignton, Babbacombe and Brixham.

Several great family attractions are in the nearby Babbacombe and St Marychurch area including Bygones with recreated period rooms, vintage shopping streets and amusements and Babbacombe’s model village and cliff lift. Take a stroll along the magnificent South West Coast Path around Torquay featuring some of the most spectacular stretches along the coastal trail, or move inland just one mile and visit Cockington Country Park with its pretty gardens and craft studios. You’ll find a wealth of information on local attractions, tours and boat trips at the English Riviera Visitor Centre down on Torquay Harbourside. 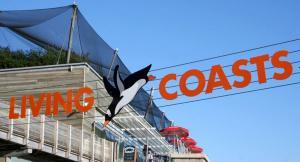 Torquay’s amazing coastal zoo and aquarium Living Coasts sits on the harbourside at Beacon Quay and packed with a huge variety of birds, bugs and sealife from penguins and seals to otters and octopus. The on-site aviary features around 300 species of birds including waders, puffins and Inca terns. Animals and activities are both indoors and outdoors, with the below deck aquarium featuring underground viewing windows so you can catch a glimpse of penguins diving! See exhibits on the local South West coastline, the popular Penguin beach populated by African penguins and Octopus Odyssey. The fantastic Tradewinds Gift Shop, a refreshment kiosk and a free entry, open to all cafe with panoramic sea views are all on-site.

Kents Cavern is just 1 mile from Torquay harbour and only a 10 minute walk off the South West Coast Path. Ranking as one of the most important cave sites in Europe, Kents Cavern is open daily for tours of the underground exhibition chamber. Some of the oldest human bones ever found have been discovered here in this ancient Stone Age dwelling. See breathtaking stalactites and stalagmite formations on guided tours and then head off on the Stone Age woodland trail. Kids will love the on-site archaeological digs and interactive cave art spaces. A great gift shop, peaceful gardens and a restaurant form part of the attraction.

Explore the many historic themes of Torquay at the superb Torquay Museum on Babbacombe Road, just a 5 minute stroll from the harbour and town centre clocktower. Collections here are wide ranging, covering topics as diverse as natural and social history, ceramics, archaeology and ancient Egypt. Galleries sit within a character late Victorian building and include an Explorers and Ancient Egypt Gallery, a fascinating Ancestors Gallery where you’ll see some of Britain’s oldest human fossils and the popular Agatha Christie Gallery packed with photography, personal effects, first editions and more.

Award-winning Torre Abbey Historic House and Gardens is one of the South West’s most treasured historic sites, located just inland from the seafront so you can walk up or hop aboard The Torquay Land Train running every 40 minutes from the seafront to the attraction. Beautiful Torre Abbey gardens contain wonderfully exotic plants, a Palm House and Potent Plants Display – a range of plant nasties inspired by various poisonous plants featured in Agatha Christie novels. Torre Abbey is the largest surviving medieval monastery in Devon and Cornwall, and was founded in 1196. Precious medieval buildings onsite include The Spanish Barn, a medieval Tithe Barn. After the Dissolution of the Monasteries it was bought by the Cary family in 1662 who made it their family home for centuries.

The site was purchased by the local authority in 1930, and today it’s a museum, gallery and historic house. One of the South West’s best collections of fine art is here including notable Pre-Raphaelite artwork and William Blake’s ‘Book of Job’. A gift shop and tearooms are just to the front of the Abbey, and various spaces from the house to the Spanish Barn, garden and Palm House are available for functions and weddings. The heritage attraction is great for families, with onsite garden and family trails. Colourful floral displays are also on show in the seafront Princess Gardens near the Pavilion and beautiful water fountain. These long-standing Torquay gardens feature along the ‘Agatha Christie Mile Trail’. Royal Terrace Gardens with rock walk and sea view platform is another Torquay garden gem on the edge of the harbour.

Dinosaur World is an all weather indoor fun family attraction with a dinosaur trail featuring life-size detailed models of dinosaurs including horned Triceratops and giant herbivore Parasaurolophus. Get up close or even climb up on these full sized dinosaur models whether you’re a big or little dino-fan! Scaled down and full sized models both feature, and the exhibit also includes a display of fossilized dinosaur skulls. Dinosaur World is located in the heart of Torquay right next to the Harbour. Public parking is adjacent.

An award-winning craft studio set within a historic manor house country park, Cockington is one of Torquay’s top family attractions just one mile from the seafront, easily reached by a regular bus service from the harbour. The attraction has over 20 craft studios within the historic manor house, a tearooms, art gallery and outside a beautiful walled art garden, a Tudor rose garden and a very popular kid’s play area. Admission is free.

Top indoor all weather attraction Waves Leisure Pool at the Riviera International Centre is famed for its fun sessions and contains a range of water play features. Slides and inflatables, a water play activity centre and toddler slide and swimming lessons are all on offer and the venue is available for private hire – ideal for children’s parties.