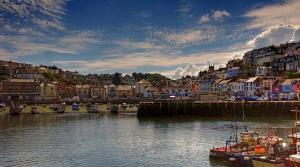 South Devon’s beautiful Bay with its warm climate, award-winning beaches, exotic palm trees and family attractions is one of the UK’s most popular holiday destinations. Torbay, also known as The English Riviera, is home to the popular seaside resorts of Torquay, Babbacombe, Paignton and Brixham, all perfect for year round breaks with a wide choice of quality accommodation from all inclusive family holiday parks and boutique hotels to luxury apartments and classic seaside guest houses. The Bay’s 22 mile long coastline has over 20 sandy beaches and picturesque coves, many of which are award-winning. The South West Coast Path runs the full length of the Torbay coast taking in golden beaches, limestone peninsulas like Berry Head, off shore islands, harbours and Downs gardens. Explore the unique geology of this coastline – the area is a great spot for a relaxing walking weekend away (with Rover too!) any time of the year.

Family friendly attractions include a wide choice of boat trips from harbours, coastal zoos, steam railways, water parks, historic abbey estates and country parks with craft studios. Pick up the FREE English Riviera Attractions Passport from Torquay Harbour’s visitor information centre and various tourist information points around The Bay and get great savings on best attractions in the area! See west end shows, family entertainment and Christie plays in Torbay’s great theatres and enjoy a year round programme of events and festivals ranging from Royal Regattas and Carnival Weeks to Food and Beer Festivals, Steam Fairs and Sports events. Top festivals include the annual September Agatha Christie Festival in Torquay and the Brixham Pirate Festival in May centred around Drake’s reconstructed ship the Golden Hind in the harbour. 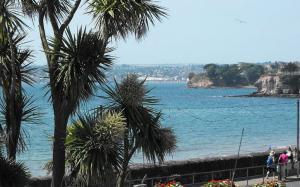 Torbay is a special landscape, untouched by glaciation and therefore rich in geological heritage. The English Riviera is one of the world’s designated Geoparks, a protected landscape which was once a scene of tropical seas, deserts, drowned forests and raised beaches, and home to earliest man. Some of the country’s oldest human bones have been unearthed at Torquay’s prehistoric Kents Cavern underground caves. The unique shape of Torbay also played a key role in defence during the Napoleonic era. Development of The Bay’s sheltered harbours and the birth of fashionable resorts date from this period.

Diving is popular in Torquay, especially off Meadfoot Beach

Water sports are easily accessed including great diving on Meadfoot beach in Torquay and windsurfing on Goodrington in the Paignton area. Many activities from sailing, kite surfing and power boating to jet ski and fishing and pleasure boat trips are available around harbours in Torquay, Paignton and Brixham. Torbay hosts numerous sailing events across the summer season including the big Torbay Week in August, one of the South West’s premier sailing regattas. This warm South Devon coastline is a mecca for sailing with annual races including the Brixham Heritage Regatta in May and Paignton Regatta in August.

The South West Coast Path, the UK’s longest trail at 630 miles, runs the full stretch of the Torbay coastline offering 22 miles of spectacular coastal walking territory through a designated Geopark. The landscape is varied with gentle stretches on central seafronts and surprisingly rural headland and cliff top walking at either end of The Bay around Brixham and Babbacombe. You can dip into mini stretches like the walk from Torquay Harbour to Daddyhole Plain via Beacon Cove (one of Agatha Christie’s favourite swimming beaches). The coast path between Torquay and Babbacombe takes in views of off shore Thatcher’s Rock island and the coast path along the Torquay and Paignton seafront is nice and gentle – great for family walks. For inspiration on gentle and challenging coastal walks along the Torbay coast visit the South West Coast Path website. 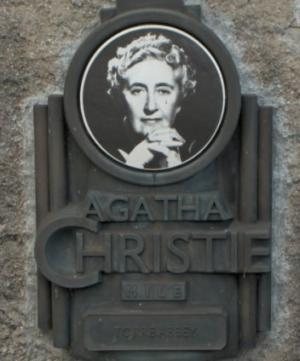 Torbay’s most famous celebrity is Britain’s greatest crime fiction author Agatha Christie, born in 1890 in Torquay. Many sights and scenes on the English Riviera feature in her murder mysteries and Torbay pays due homage to its famous author, with a host of events and festivals, trails, exhibitions and drama performances. Catch an Agatha Christie play at Paignton’s Palace Theatre and see a Christie exhibition in the Torquay Museum! Explore favourite beaches where Christie swam such as Beacon Cove and Meadfoot, stroll along Princess Pier where she often roller-skated – the pier was built in the year that she was born.

Pick up combined boat and bus trips from Torquay (Princess Pier) and Brixham (Quayside) to Christie’s historic home Greenway. A great time to visit is during the annual Agatha Christie Festival in September with literary talks and tours, murder mystery events, themed boat trips and more. Torre Abbey Gardens in Torquay has a Potent Plants Garden with ‘nasty’ plants inspired by poisons which Christie featured in her novels.

Babbacombe Theatre on The Downs

Torbay hosts many events and festivals all year round from Christie Festivals to sailing regattas and great music, beer and food festivals. Family fun is on offer during Brixham’s two May events – BrixFest and the Brixham Pirate Festival. There are also numerous seasonal themed events centred around attractions including the Babbacombe Model Village Illuminations, summer ghost tours at Kents Cavern, Halloween themed events and Cockington Village Christmas Fair. Classic pantomimes and summer seaside shows feature in Torbay’s vintage seaside theatres including the Palace in Paignton, the seafront Princess Theatre in Torquay and Babbacombe Theatre on The Downs. Torquay hosts an annual Pride event at the end of August based around the Meadfoot Inn and popular Torquay Carnival Week takes place annually in July featuring a host of live entertainment, craft marquees and family activities.