Top 10 Things to do this August Bank Holiday (and more)

This August Bank Holiday weekend why not head out and about in the UK, and stay a night or two! Looking for some last minute inspiration? Here’s our pick of the top 10 things to do this Bank Holiday. The UK has 169 Blue Flag award-winning beaches, 14 stunning National Parks, state of the art waterparks and theme parks, real ale trails, quirky family events and breathtaking World Heritage Coastlines just waiting to be discovered this August Bank Holiday Weekend.

Where will you be this Bank Holiday Weekend?

Scarborough’s brand new waterpark is now open and promises the waterpark experience to beat all featuring a huge wave pool erupting every 30 minutes with metre high waves, a warm outdoor garden pool with whirlpools and a relaxing infinity pool with soothing iodine water!

2. Head off on the Real Ale Trail

In Wharfedale in the southern Yorkshire Dales. Sample some of the finest locally brewed ales in some of the Yorkshire Dales’ finest inns including The Grassington House Hotel and the Foresters Arms in Grassington, The Buck Inn at Buckton and The Blue Bell and King’s Head at Kettlewell. No need to worry about transport – hop aboard the ‘Pride of the Dales’ hopper bus services.

Have you heard – the Bronte Parsonage Museum has teamed up with the Keighley & Worth Valley steam railway to offer an additional vintage bus service (which goes open top in fine weather). From Haworth station the vintage bus heads up the famous steep hill to the top of Main Street and the Bronte Parsonage. The bus service is FREE with a Rover or Family ticket so what are you waiting for!

It’s a great time to shop with the pound stretching that bit further especially for overseas visitors! Checkout the laid-back unique shopping experiences in England’s great cathedral cities! Stroll down the famous Shambles in the heart of York and take a break in Yorkshire’s own Betty’s Tearooms.

6. Be a last minute festival goer on the Isle of Man

Some of the big high profile festivals may well be booked up this Bank Holiday weekend, but who wants to follow the crowd! Bike lovers won’t want to miss the newly developed Classic TT Races at The Isle of Man Festival of Motorcycling running across the Bank Holiday weekend into early September. 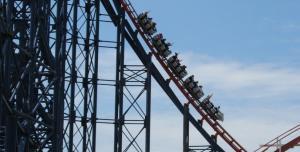 7. Coaster into the Night at Blackpool Pleasure Beach

Hit the Surf on Fistral Beach in Newquay

8. Hit the surf in Newquay

Make it this Bank Holiday when you book your first surfing lesson and hit the surf on one of Newquay’s choice of top surfing beaches from Lusty Glaze to England’s top surfing beach Fistral.

9. Take a boat trip to an off-shore island

Beaches and boat trips combined guarantee an extra special Bank Holiday weekend escape. Make like you’re in the Caribbean and head to Tenby on the Pembrokeshire Coast in South West Wales with its choice of award-winning beaches. Pick up boat trips from the harbour to off-shore Caldey Island.

Exploring the Beatrix Potter Trail – Borrowdale in the Lake District

10. Dip in to the new Beatrix Potter Trail in the Lake District

Think you know Beatrix Potter, Britain’s celebrated children’s author? The National Trust have made discovering more easier by developing the fascinating Beatrix Potter Trail around the Lakes and Cumbria. The trail forms part of the 150th Anniversary birthday celebrations and not only treads in the footsteps of Potter herself, but also takes in key sites featured in her children’s books like the Cat Bells walk near Keswick which is where Lucie tracked Mrs Tiggy-Winkle !