Brewery Arts Centre, Kendal – host venue for many of the town’s festivals & events

If you’re looking for a unique festival experience in a stunning setting, look to the pretty market town of Kendal in Cumbria close to the south eastern boundary of the Lake District National Park. Whatever your preferred festival flavour be it best Cumbrian food and real ale shop windows, international music festivals or perhaps a top UK outdoor enthusiasts gathering, you’ll find them all here in Kendal’s annual festival line-up.

This South Lakeland market town is easy to get to, just off the M6 and with two stations, one of which Oxenholme just 2 miles from the town centre sits along the fast West Coast mainline. You’ve also one of Cumbria’s best independent shopping experiences here along with numerous real ale inns, tearooms, cafes and indoor/ outdoor markets, an award-winning arts centre, major Lakeland museums and galleries plus beautiful central parks and a great choice of B&Bs, cottages, camping/ caravan parks and small hotels – essentially the perfect festival weekender package.

For two days at the end of March annually the Kendal Festival of Food comes to the market town featuring the best of local and artisan producers, internationally acclaimed chefs and up and coming new talent. One of Country Living’s top British food festivals, the Kendal Festival of Food will appeal to families and foodie fans alike. Entertainment, street theatre, a family festival village round Elephant Yard and plenty of opportunity to sample Cumbria’s finest real ales at the festival bar all form part of this two day weekender.

Running alongside the Kendal Festival of Food, Beer Fest is hosted by The Brewery Arts Centre annually in late March and is a glorious mix of fantastic beers served up in Vats Bar accompanied by plenty of local bar food and great live music.

One of several great annual festivals centred around Kendal’s award-winning Brewery Arts Centre and also in various South Lakeland venues, the Freerange Comedy Festival annually in mid-May includes familiar TV comedians and plenty of new comdey talent, with some great extras mixed in too like the unmissable Magical Mystery Tours. Comedians performing here love Kendal and Freerange as much as the audiences who attend.

Renowned as one of the best international summer classical music festivals, the Lake District Summer Music Festival annually in early August is hosted by various venues in Kendal and Lake District National Park. 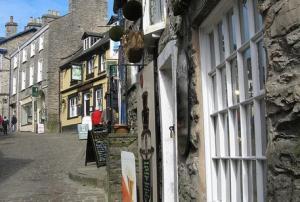 What better venue than Kendal for a street performance festival with its beautiful historic wynds and yards. Packed with circus, theatre, dance and walkabout performances, Mintfest takes place annually across the late August weekend with performances mostly FREE! The Brewery Malt Room is the festival club hub serving up best local ales accompanied by cabaret and Prosecco, late dancing and in the Brewery gardens enjoy afternoon/evening tea and world music. Saturday entertainment is in the town centre, with the festival moving to Abbot Hall Park on the Sunday.

Festival fun is year round in Kendal. The Kendal Torchlight Carnival takes place in September annually and it has a long history in the town stretching back to 1970. Over 60 colourful floats and a host of marching bands, carnival performers and dance groups all take part. A trophy presentation and party also takes place after the Carnival.

The Westmorland County Show held annually on the second Thursday in September and hosted by Lane Farm, Crooklands Kendal is one of the UK’s largest and oldest county shows. An agricultural show at heart with over 350 trade stands showcasing the very best of Cumbrian local produce and crafts, if you’re looking to discover traditional Westmorland at its best this shop window is where to head!

Centred around Kendal Town Hall, the Westmorland Beer & Cider Festival is one of the town’s most long-standing festivals showcasing the very best of local Cumbrian and UK wide real ales and ciders. Around 55 beers and 15 ciders are here for the sampling accompanied by locally made pies, breads, cheeses and homemade pickles and chutneys.

Modelled on European comic festivals, The Lakes International Comic Art Festival annually in October is centred around the Brewery Arts Centre but also includes many free events and live drawing sessions across the town. High profile artists in the world of comics are in attendance and themes change annually. It’s a great festival for families with kids zone and a host of films, workshops, talks and exhibitions. Tickets usually go on sale late April – book early for this best UK comic festival.

The UK’s top gathering for outdoor enthusiasts, Kendal Mountain Festival annually in November is one of those visionary festivals that stands alone with its variety of events which include an internationally famous film competition. Large numbers of visitors arrive in the market town from across the world and high profile speakers always feature in the line-up. Early bird tickets usually go on sale on the website in June!