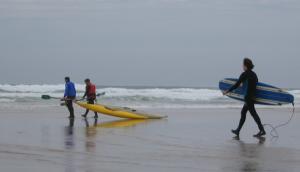 Britain’s great living theatre of plants and people, The Eden Project biomes are an iconic attraction in the UK taking the visitor on a journey through the exotic plants of the world from the flora and fauna of the Amazon Rainforest to local Cornwall plants and the Tropical fruit plants of Africa. A top family attraction in Britain, the Eden Project is an interactive tour de force for children with family trails, zip-wire rides, beautiful artworks, garden sculptures and great themed family cafes, restaurants and environmentally themed book and gift shops. A recent addition is the summer Eden Sessions – the best pop artists performing with a biomes backdrop. Concert entry includes a free ticket to the Eden Project on the same day as the concert.

The West Cornwall coast is where you’ll find some of Britain’s most spectacular beach bays. Exotic Porthcurno Beach west of Penzance is one of the best. This naturally formed beach bay framed by dramatic granite rock formations boasts glorious golden sands and a magical clear turquoise hue. On warm sunny days you might imagine you were on a tropical beach in the Caribbean!
High on the cliff top headland overlooking Porthcurno Beach is The Minack Open Air Theatre, the product of one woman’s vision – Rowena Cade. The Minack Theatre is a spectacular theatre venue hosting open air Shakespeare plays and other top classic drama performances. 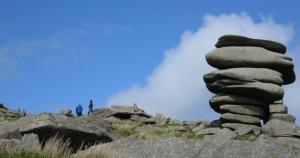 The combination of prehistoric stone circles, standing stones and burial mounds like the Hurlers plus some of Britain’s most unusual naturally formed granite rock formations like the Cheesewring, the result of retreating glaciers, makes Bodmin Moor in East Cornwall the region’s great natural and prehistoric treasure.

The coastal path from Kynance Cove to Lizard Point and the Lizard Lighthouse is one of Britain’s top coastal walks for breath-taking cliff-top walking drama. With its rugged and dramatic landscapes and spectacular beach bays, the cliffs of Kynance Cove are carpeted with wild flowers in summer.

Coastal walking on The Lizard Coast

Beautiful Padstow with its pretty harbour bay on the North Cornwall Coast is synonymous with internationally acclaimed celebrity chef Rick Stein. Stein’s restaurants, fish & chip takeaways and cafes in Padstow attract huge crowds and they are well-placed here adjacent to the rich fishing territory of the North Cornwall coast. Four Rick Stein restaurants are in Padstow and the chef also has a fine inn at St Merryn – The Cornish Arms plus a Falmouth fish and seafood restaurants called Rick Stein’s Fish.

Affectionately known as ‘The Mount’ and the ‘jewel in Cornwall’s crown’, St Michael’s Mount is steeped in myths and legends and is one of Cornwall’s most popular attractions. An ancient off-shore island treasure on the South Cornwall coast, St Michael’s Mount is accessible on foot via the tidal causeway when exposed in low tide or by boat trip. On this sub-tropical island paradise are beautiful gardens, the iconic medieval castle which visitors can climb to the top of for panoramic views, an underground tram, cafes, restaurants and gift shops.

‘It’s the light you see’ was Barbara Hepworth and Ben Nicholson’s attraction to St Ives and West Cornwall. They first arrived in St Ives in 1939 and the Tate Gallery St Ives as well as the Barbara Hepworth Museum and Sculpture Garden, formerly Hepworth’s studio, are where to see extensive work by Hepworth and the St Ives School of Artists. The Tate St Ives is one of Britain’s top art galleries for international modern art and is a stunning gleaming white architectural gem in itself flanking beautiful Porthmeor beach in St Ives. 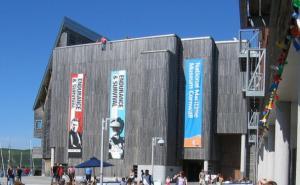 The National Maritime Museum is well placed here in the home of Cornwall sailing Falmouth. Situated on the stunning Falmouth Quays, the National Maritime Museum will please both families with children and maritime historians. The galleries within explore a range of themes from seafaring history and exploration to marine artists and the history of sailing and seafaring in Cornwall. Fascinating exhibitions explore a range of maritime themes from Cornish smuggling and fishing to sea search and rescue.

The dramatically situated 13th century coastal castle remains of Tintagel Castle are steeped in Arthurian legend, including a claim that Tintagel is the birthplace of King Arthur! One of the UK’s most spectacular coastal castle ruins covering a headland and island, Tintagel’s history stretches back to the Roman period and you’ll find some real fun family events here including Fighting Nights recreating battles! Spectacular coastal walking is also here on this stretch of the North Cornish coast.