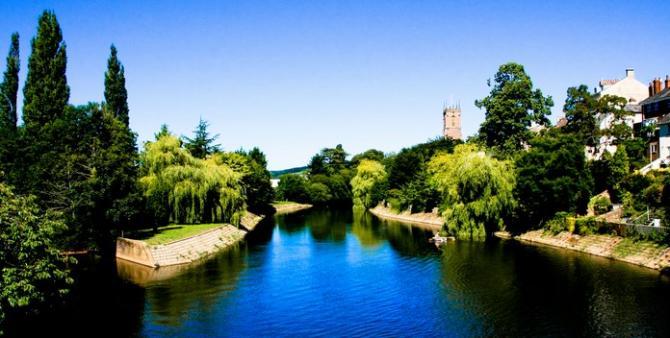 The River Exe at Tiverton

Tiverton is Mid-Devon’s largest town just to the south of Exmoor National Park and west of the Blackdown Hills Area of Outstanding Natural Beauty. Easily accessed off the M5, it’s the perfect destination for a short break or holiday, with Exeter an easy drive away. Tiverton is a town of waterways. The Grand Western Canal runs through it, and just to the south of the centre Devon’s main river the Exe and the River Lowman meet. The waterways offer a wealth of leisure activity opportunities including canoeing and fishing for the famous Exe salmon. A warm welcome is extended to visitors at Tiverton Golf Club, and in the wider parish sit many picturesque villages like Bickleigh brimming with old inns, craft centres, old bridges, water mills, Grade Listed buildings and quintessential thatched Devon cottages.

Accommodation in & around Tiverton

A popular Balloon and Music Festival takes places in Tiverton annually in mid-July attracting over 30 balloons which when they take to the skies are a spectacular sight. Evening entertainment includes one of the highlights of the event, the ‘Night Glow’ where balloons provide a fire and light show accompanied by music, fire jugglers and a lantern procession. Accommodation choice in the centre and surrounding villages includes pretty 18th century guest houses and farm B&Bs. Tiverton has some classic wedding and leisure hotels set in beautiful private grounds, or stay in a boutique riverside hotel on the banks of the Exe, perfect for a romantic escape. Old inns with rooms brimming with character and serving fine food and ales are plentiful here in the heart of Devon. They include some charming thatched country inns in a great location midway between Tiverton and Exeter. 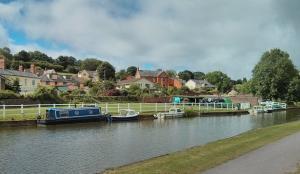 The Tiverton Canal Co. alongside The Grand Western Canal is a fantastic canal park free to enter all year round with on-site towpath walking, horse drawn barge rides, boat hire, fishing, a nature reserve and a floating cafe bar. Visit The Yearlstone Vineyard, Devon’s oldest vineyard at Bickleigh village in the lower valley of the river Exe, and Bickleigh Mill, a mill shopping centre with a bistro restaurant, gift shops, craft stores, woodland and riverside walks and a working water wheel.

The Tiverton Museum of Mid Devon Life is free to enter and designed with all ages in mind or explore historic Tiverton Castle where you can learn about weaponry and take a tour of the pretty walled gardens, as well as looking out for the ghost known as the Vanishing Bride! The Devon Railway Centre includes miniature and model railways, a model village, indoor and outdoor play areas, family rides, crazy golf and a wildlife area. Tiverton is also home to the Tivoli Cinema screening all the latest films.

Canal town Tiverton offers spectacular towpath walking along The Grand Western Canal which was built in 1814 mostly to serve the lime trade. Horse-drawn tub-boats were used and worked on this Devon and Somerset Canal which by 1838 extended all the way from Lowdwells to Taunton. It was a busy stretch of canal, with several tub-boat lifts (7 in all), and there was an incline plane so it was hard work for the horses. The Grand Western Canal closed in 1869, much earlier than many of Britain’s other larger canals such as the Shropshire or Grand Union Canals.

Today 11 miles of The Grand Western Canal are open to the public. This stretch has been preserved and has not dried out due to its natural water supply from local springs. A superb country park surrounds the canal and there’s lots going on. It’s a perfect spot for picnics, fishing, cycling, walking or alternatively why not take a leisurely horse drawn barge trip with a licensed bar serving fine real ales, tea, coffee and snacks, and canal gifts available. A popular trip is the Tiverton Wharf to East Manley return trip including a stop off to view the only aqueduct on The Grand Western. There are 16 miles/26 km of towpath flanking this historic waterway. The surrounding landscape is agricultural, and the towpath passes through a selection of attractive villages. 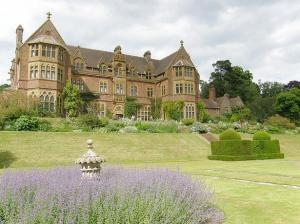 Tiverton Castle has had a turbulent history, changing hands several times. The Castle fell to the Parliamentarians during the English Civil War. Built in 1106, little remains of the original construction as it was rebuilt in stone under the Courtneys’ ownership. The Castle you see today is a mix of medieval and more modern architecture, and famously features a medieval lavatory! Civil War armoury is on display and a small shop and pretty walled gardens are on-site.

The National Trust’s magnificent Knightshayes Gothic Revival country estate sits just north of Tiverton. The quirky house, created by William Burges, features a medieval inspired great hall and many beautifully carved rather grotesque gargoyles. The surrounding walled and woodland gardens, and parklands are some of Devon’s finest containing a large kitchen garden and offering numerous wildlife walks and trails. A children’s play area, conservatory tearoom and a Stables Cafe are onsite. Knightshayes is great for days out with dogs who are allowed to roam free, off the lead in parkland areas away from the driveway and in the woodland! Homemade dog biscuits are available in the restaurant area after your walk in the grounds!