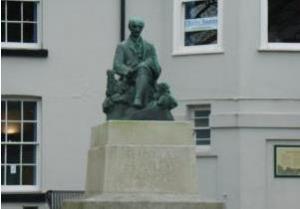 Thomas Hardy was born and spent most of his life in Dorset. He was born not far from Dorchester at Higher Bockhampton and he lived on the outskirts of Dorchester at Max Gate. Although he spent some time in London his heart never left Dorset and he spent the majority of his life here. He used places, names, landscapes and local events as inspiration for many of his stories and characters. Nearly everywhere you go in Dorset you’ll find some reference to Hardy and it appears he travelled widely. Being such a beautiful county it is no wonder it has been such an inspiration to him and other poets and writers.

The Dorset County Museum in Dorchester with the world’s largest collection of Hardy artefacts is essential visiting for fans of the author. Many of his manuscripts, books, diaries, photographs, notebooks and paintings were bequeathed to the museum by Hardy’s second wife and secretary, Florence Hardy. There is also a reconstruction of Hardy’s study at Max Gate. Information on Hardy Guided tours and leaflets for self-guided Hardy Tours of Dorchester and Dorset are available from the award-winning Dorchester Tourist Information Centre on Antelope Walk.

Thomas Hardy was born in 1840 in the pretty cob and thatch cottage in Higher Bockhampton just three miles north east of Dorchester. You can visit the cottage and its traditional country cottage garden as it’s now owned by the National Trust. It has changed little since the Hardy family lived here and the interior has been furnished in the style it would have been when Hardy lived here and wrote "Under the Greenwood Tree" and "Far from the Madding Crowd".

Another of Hardy’s residences that is open to the public is Max Gate (National Trust) just a mile east of Dorchester. This was designed by Hardy who trained as an architect originally and built by his father in 1885. He was working on The Mayor of Casterbridge when it was being built and he was overseeing the project. Later Jude the Obscure and Tess of the D’Urbervilles were also written here along with a large part of his poetry. Hardy and his wife Emma moved here and, although Emma met an untimely death, Hardy remained here until he died in 1928. You can visit the gardens, hall, dining and drawing rooms at Max Gate in which there are several pieces of Hardy’s furniture.

After his death Hardy was buried in Poets Corner at Westminster Abbey. However, his family and friends had intended that he be buried at Stinsford in the same grave as his first wife, Emma Gifford, whose sudden death in 1912 had shaken him and inspired him to explore his grief through poetry. As a compromise his heart was buried with his wife at Stinsford while his ashes were buried at Poets Corner. Hardy was also christened here and he used Stinsford (Mellstock) in his novel "Under the Greenwood Tree". A stained glass window in the church has been inscribed in his honour.

Hardy took inspiration for his novels and poems from real life incidents and the towns and villages that he was most familiar. He crafted his books around the county of Wessex which included Dorset in the old Saxon Kingdom of Wessex. Hardy would often change place names for the fictional stories, as he did with Dorchester to Casterbridge, Sherborne to Sherton Abbas, Cerne Abbas to Abbot’s Cernel and Beaminster to Emminster in Tess of the D’Urbervilles, but enough of the landscape and architecture was alluded to to give us clues as to where the stories were really set. You can take a whole host of walks and tours around Dorset to some of the more familiar locations which have not only featured in his novels, but also in numerous film and TV adaptations.

Blackmore Vale, over which Sturminster Newton overlooks, was called the "Vale of the little dairies" by Hardy and "Tess of the D’Urbervilles" was set here. This has changed little since that time – dairy farming is still prevalent here. Thomas Hardy lived in Sturminster Newton with his first wife. He wrote "The Return of the Native" while living in Riverside Villa, a cottage overlooking the River Stour.

Hardy is said to have used the case of Martha Browne at Dorchester’s Old Crown Court & Cells in 1856 as inspiration for Tess of the D’Urbervilles. Browne was the last woman to be publicly hanged for murdering her husband with an axe. Beaminster in West Dorset was also used as a backdrop for Tess of the D’Urbervilles in which he calls it Emminster. Portland Museum on the Isle of Portland was Hardy’s inspiration for the heroine Avice’s cottage in his novel "The Well Beloved".