Things to Do in Aberystwyth

Aberystwyth, or Aber for short offers a great mix of holiday experiences. A seaside fun centre with some enchanting historic seaside attractions and a bustling party pier, the town also has a large student population and a bohemian atmosphere. Aberystwyth University dates back to 1872 when the town was selected as the site for the first University College. The National Library of Wales followed, opened in 1907. Note the Old College near the pier, a gregarious yet beautiful architectural gem in the Victorian Gothic revival style. 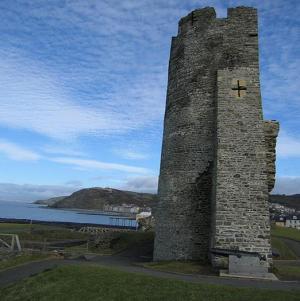 The town is a seaside family favourite on Cardigan Bay with a great quirky shopping scene featuring a wide choice of stylish boutiques, craft and gift centres. The two sweeping sandy beach bays are flanked by a wonderful strolling promenade which in turn is flanked by a choice of historic seafront hotels. Aberystwyth also has its own dramatic castle remains situated just a short walk from the pier on an elevated spot at the end of the prom.

Aberystwyth has long been pulling in the holiday crowds. The railway came here in 1864, and Aberystwyth simultaneously remade itself as a resort. A selection of character old Georgian hotels line the promenade backing onto North Beach. The Promenade and seafront stretches for around a mile and a half from the harbour to Constitution Hill (the site of the Cliff railway).

Dating from 1277, Aberystwyth Castle was finally completed in 1289. It’s one of many castles built by Edward I in Wales after his defeat of Llywelyn ap Gruffydd. The Welsh didn’t give up on recapturing it back and there were two Welsh uprisings. In 1404 Owain Glyndwr succeeded in capturing it, although it was won back by the English in 1408.

The strategic site of Aberystwyth Castle was recognised by the English who established the Castle as a key seat of Welsh government. It has also been a prison, holding French prisoners in 1415, and later in 1637 a Royal Mint was set up here.

The arrangement of bardic circle stones you see within the castle walls today were put up for the 1916 Eisteddfod. A war memorial, a children’s playground and lots of places to sit and picnic whilst admiring splendid views out to Cardigan Bay are also on the castle site.

Rising up to 430 feet, Constitution Hill is an iconic feature in Aberystwyth, jutting upwards at the end of North Beach. You can either walk up to the top (not too taxing at all, with well marked trails all the way) or you can take the historic Cliff Railway. Panoramic views up here are memorable, as far reaching as the Llyn Peninsula on a clear day, and the other way across to Snowdon and Snowdonia. Fine views can also be seen of the Cardigan Bay coast up to Aberdovey and beyond!

The cliff railway up Constitution Hill is the longest electric cliff railway in Britain, and visitors have been enjoying it since 1896. When it first opened in 1896 it operated on a sophisticated water balance system but went electric in 1921. The carriages shunt up to the top at a speed of 4 miles per hour. Lovers of old funicular constructions from the Victorian period will be familiar with the name of George Croydon Marks who designed the Aberystwyth Cliff Railway. Marks went on into politics and like Lloyd George became a Liberal peer.

Attractions on the top of the hill include a gift shop and cafe, a children’s playground, various displays outlining the history of the cliff railway and one of the world’s largest camera obscuras offering 1000 square mile views of the surrounding coast and countryside.

Hop aboard the one hour ride on the narrow gauge Rheidol Railway at Aberystwyth. This is one of the most popular railway routes in Wales, taking you through 12 miles of the River Rheidol Valley scenery culminating at Devil’s Bridge. The route dates back to 1902, and originally served the lead mines in the Rheidol Valley. Today it’s a popular attraction with tourists. Views of the wooded Rheidol Valley en-route are beautiful and once at Devil’s Bridge there’s a number of walking trails including the popular walk to Mynach Falls and trails leading to beauty spots including Devil’s Punchbowl and Jacob’s Ladder. The terminus for the Rheidol Railway is adjacent to Aberystwyth’s main railway station.

The free entry Ceredigion Museum sits on Terrace Road in the Coliseum, formerly a theatre from 1904-5 and then a cinema in the 1930s. Most displays feature exhibits from the Victorian period to the present and include a range of items from clocks, costumes and ceramics to a fascinating Tourism display with old travel posters and holiday photos.

The National Library of Wales

The National Library of Wales is an archive treasure holding such precious items as the Black Book of Carmarthen dating from the 12th century. A visitor centre with exhibitions displaying items from the collection is onsite. Millions of printed volumes of books, periodicals, newspapers and so on are held here. If you’re researching any subject on Welsh history, heritage or culture then this is where to head.

The Aberystwyth Arts Centre is the town’s arts entertainment hub located within the university campus. Cinema, both independent and mainstream, and art exhibitions are on offer here. A cafe, theatre and children’s theatre, a dance school, a craft and design shop, a bookshop and two great bars are all within the venue. The School of Art which holds an impressive collection of art and pottery is also well worth a visit, located just a short stroll from the town centre.