Coastal Walking around The Lizard Peninsula 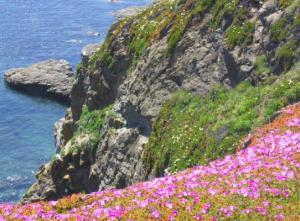 The rare and colourful flora of The Lizard coastline

The Lizard Peninsula on the South Cornwall coast is often known simply as The Lizard and is the most southerly point of the British mainland. With its dramatic rocky cliff and cove beach coastline combined with a mild climate and plethora of rare plants and wildlife, The Lizard is a top spot for coastal walking, adventure activities, diving, surfing and birdwatching. The National Trust cares for much of the coastal stretch at the southern tip of the Peninsula around Lizard Point with its famous seal colony, and the cliff top Lizard Lighthouse. The Trust also owns the coastal stretch around Kynance Cove, one of world’s most beautiful cove beaches just north of Lizard village. Picture-postcard harbour villages like Mullion Cove, Coverack and Cadgwith also feature around The Lizard coast, and it was on The Lizard at Poldhu that Marconi first undertook pioneering work in radio communications. Find out more at the free entry Marconi Centre with video introduction, exhibits and self-guided tour.

Accommodation on The Lizard 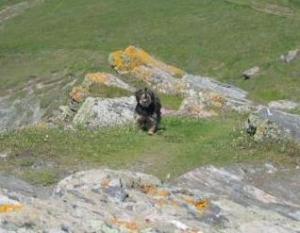 Holidays with dogs on The Lizard

Great watersports in the crystal clear gulf-stream warmed waters of The Lizard are available on the east coast of the peninsula including world class diving around the Manacles reef covering around one square mile and featuring numerous shipwrecks. St Kerverne’s churchyard close to Manacle Point contains the graves of victims of the Mohegan steamship which was wrecked off the coast here in October 1898. Windsurfing, coasteering, snorkelling, rock pooling, surf kayaking, boating and fishing trips are all on offer with activity centres located in hotspots like Coverack village on the east Lizard coast. Inland you’ll find plenty of opportunities for cycling and a choice of bridleways and footpaths.

Dog Friendly Holidays on The Lizard 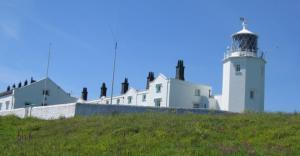 Things to do on The Lizard

Both the west and east coasts of The Lizard Peninsula offer a choice of idyllic beaches, including on the west coast spectacular cove beach Kynance Cove. Explore beautiful coastal walks around Lizard Point and take summer tours of Lizard Lighthouse. Rugged and dramatic landscapes are on the lower west coast of the Lizard, whilst on the east side discover some magical fishing villages such as Cadgwith. Lizard attractions include the free entry Cornish Camels with camel centre, organic cafe, farm shop and farm trail. Don’t miss a fun family day out at Flambards Theme Park near Helston with thrill rides and children’s rides, indoor and outdoor play centres, award-winning exhibitions and interactive science exhibits. 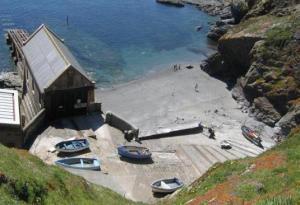 Cove Beaches around The Lizard

Some of Cornwall’s prettiest cove beaches can be found around the Lizard coast including the famous turquoise waters of Kynance Cove which becomes completely submerged at high tide. Beautiful cove beaches sit adjacent to coastal villages like Cadgwith which has two pretty cove beaches, one of which – East Beach is dog friendly. Stay around Coverack on the east coast and enjoy a beach with fine golden sands and great opportunities for watersports. Popular Lizard beaches with surfers include Kennack Sands near Kuggar village and Rinsey beach is a top spot for angling.

Dramatic Kynance Cove on the west coast is cared for by the National Trust and regularly features amongst a list of the world’s best beaches! This idyllic white sandy cove, best for swimming at low tide is submerged at high tide so double check tide times to avoid disappointment. A steep path leads down to the cove beach from the South West Coast Path and facilities include toilets and one of the UK’s most spectacularly situated beach cafes serving food from Easter to November. 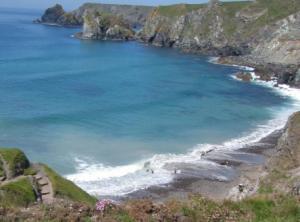 The coastal and inland towns and villages of The Lizard include bustling market town centre Helston, the peninsula’s largest town, and a host of unspoilt inland and coastal villages offering a choice of cosy cottages, small hotels and B&B guest houses inclusive of hearty Full Cornish breakfast to set you up for a days coastal walking. Lizard accommodation is independently run, with unique character and charm assured. Picturesque villages and hamlets like Mullion, St Keverne, Manaccan, Lizard Village, Cadgwith, Gweek and Mawgan feature charming old inns, tea rooms, craft galleries and shops. Mullion Cove is one of many pretty villages around the Lizard with a small beach, shops, toilets, boat trips and off-shore Little Mullion Island bird sanctuary.