Tenby in Pembrokeshire is a pretty seaside town to the West of Carmarthen Bay, situated just at the end of the South Pembrokeshire Heritage Coast. At low tide, Tenby is connected to St Catherine’s Island – a raised, rocky island on which Palmerston Fort stands (it was built in 1867 as a defence from sea attack). 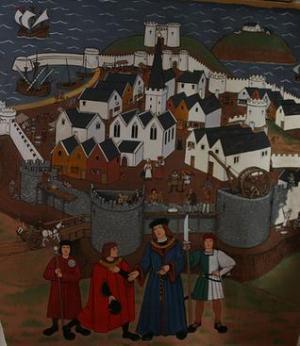 Tenby was fortified by the Normans and most of its original town walls still remain to enclose the medieval old town (the town’s walls incorporate the Barbican Gatehouse called Five Arches, a stunning and very individual feature). Tenby’s name means ‘small fortress of fish’, but don’t worry that it sounds too severe – it isn’t! The fish trading is no longer predominant, and the walls and harbour aren’t fortresses – they attract rather than repel visitors.

Tenby’s castle was captured in 1648 (nowadays only the keep remains) and shortly afterwards the town lost around half its residents to a plague, shrinking the town’s importance for a couple of hundred years. But Tenby returned to life following its nineteenth century transformation into a health resort. 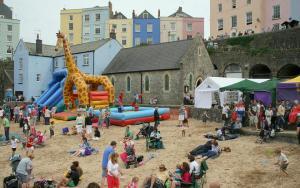 Beaches, sailings and things to do

A recent Which report described Tenby as “one of the UK’s finest holiday resorts, with a medieval centre and three gorgeous Blue Flag beaches". Its 2.5 miles of beaches are extremely popular, and regular sailings run from the harbour to nearby (monastic) Caldey Island.

The bustling town is popular both day and night, but why not step out of the town and visit the nearby Tenby Dinosaur Park (not just for children!), or take the town’s year-round guided ghost walk to learn of local hauntings, ghosts, customs, witches and murder? Regular festivals are held in the area, including the well-established Tenby Arts Festival – choirs, literature, classical music, art, opera, painting, verse, song, young musicians and lots more. Here’s their link

Tenby’s Tudor Merchant’s House, owned by the National Trust, is a popular attraction, and St Mary’s Church tower is historically significant too. Around 700 years old, it is one of the oldest church towers in Pembrokeshire and was historically used as refuge and lookout point – the parapet’s views of the medieval town are quite stunning.

How to get to Tenby

Coastal Tenby is reached via the A478 – just off the A477. To get to the main UK motorway network, the A478 takes you 40 miles East to the M4. Alternatively, Tenby has its own railway station.

Where to stay in Tenby

Mainly self-catering cottages and guest houses, we are delighted to be able to offer visitors accommodation either on the front or a little inland. Whatever your requirements, why not take a look at our inspirational lists below, and visit Tenby soon!