St Austell – an ideal holiday base near the Eden Project

The largest town in Cornwall, St. Austell on the Cornish Riviera is home to St. Austell Brewery and is rich in china clay history. The town is ideally close to some of Cornwall’s most popular attractions including the Eden Project, the Lost Gardens of Heligan and Wheal Martyn China Clay Museum, Britain’s only China Clay Museum. The town centre contains many shops and services including a large shopping centre, cinemas, restaurants and bars. Award-winning family friendly sandy beaches around St Austell Bay including Par, Carlyon Bay and Gorran Haven are within easy reach and premier golf courses are also in the area including Porthpean, St Austell and Carlyon Bay. Cornish Market World at Stadium Retail Park in the Par area near St Austell is the largest indoor market in the South West, with more than 120 stalls, Kidzworld play area with a digital climbing wall, mini golf, indoor and outdoor play areas, a high ropes course and a dodgems ride.

St Austell Brewery produces the South West’s most popular selection of beers including great seasonal favourites. Take a guided tour through the Victorian brewery and see the whole brewing process up close. You’ll find out about the brewery’s secret spring which supplies the water used in their fine Cornish ales. The onsite Visitor Centre is a multi award-winner and there’s plenty of opportunity to sample some of the brewery’s award-winning ales in the Hicks Bar which also serves fantastic home-cooked pub food and snacks, freshly prepared and cooked to order. A Brewery Shop and Warehouse selling their full range of wines, spirits, bottled beers and a range of clothing and gifts all at special prices is also onsite.

The mining of china clay is integral to the history of Cornwall and St Austell, so don’t miss a visit to the fantastic family friendly Wheal Martyn China Clay Museum and Country Park. The attraction sits close to the town centre and just a stone’s throw from the Eden Project which was actually constructed on top of an old china clay mine! Numerous Clay Trails also branch out from the museum, and inside the complex you’ll see interactive exhibits on the men, women and children who worked in the industry. A vast water wheel and preserved Victorian china clay mine, children’s play areas and trails, a cafe, shop and viewing platform are all on-site.

A network of Cornish china clay trails for walking, cycling and horse riding are around St Austell. Great news for outdoor enthusiasts with an interest in exploring the heritage of china clay in the area. The trails are good solid gravel trails, ideal for families and scooters. One of the most popular is the St Austell link to the Wheal Martin Trail. Commonly known as the ‘Green Corridor’, this trail runs for nearly two miles and is open to cyclists, walkers and horse riders. The St Austell Link trail runs from the centre of St Austell and Tremena Gardens direct to the Wheal Martyn China Clay Park.

Park up at the Wheel Martyn museum and head off along the 5 mile Wheel Martyn to Eden trail! This trail runs directly alongside china clay mines, and passes through beautiful woodland and heathland. Alternatively head up the A391 to the old mining town of Bugle, hire a bike and cycle along the trail from Bugle to the Eden Project (4 miles). Car parking is available on Rosevear Road, the starting point of the Bugle to Eden Trail. Other scenic routes include the 3 mile St Blazey to Par Beach trail. This trail explores the heart of china clay country, and pushes towards Tywardreath, associated with Daphne du Maurier’s novel, “The House on the Strand”, then on towards Par Docks with its tall china clay drying chimneys, and spectacular Par Beach beyond. 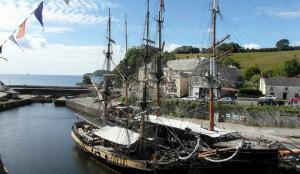 Located on the outskirts of St Austell, beautiful Georgian Charlestown Harbour is Grade II Listed. Constructed in the late 1700s by Charles Rashleigh, the harbour is actually two harbours – an inner harbour with stable water levels still fed by original 18th century man-made waterways and an outer tidal harbour. A collection of heritage tall ships can be seen here – the harbour and tall ships at Charlestown have numerous film and TV credits. The Charlestown Shipwreck Museum on the waterfront features exhibits and artefacts from shipwrecks in the area and a fascinating display on diving equipment, the history of gas, sea rescue, china clay mining heritage, an exhibition on Admiral Lord Nelson and the Titanic. Children under 10 years enter free.

St Austell is easily reached by road, just off the A390. St Austell station is well connected to mainline networks, offering easy access in by rail. Regular bus services also run to and from St Austell between top attractions like the Eden Project and Heligan, and from Newquay. The airport at Newquay is just under 15 miles away. Cornwall’s largest town offers a huge variety of accommodation both in the town centre and around the Riviera’s St Austell Bay. Welcoming B&B guest houses and inns with rooms, as well as budget hotels and luxury hotels spa hotels are widely available around the town centre. Around the Bay you’ll find a plentiful choice of family holiday parks, luxury cottages, apartments and modern holiday homes.