Southport’s Lord Street is a hub for not just shopping but also arts. The Atkinson, a Grade II Listed building, sits right in the centre of Lord Street and is one of the North West’s hidden gem arts and cultural centres with an outstanding art collection. The Atkinson is also a Southport centre for music, film, dance and drama, featuring state of the art facililities including a studio, gallery spaces, a theatre, library, bakery and arts/gift shop. 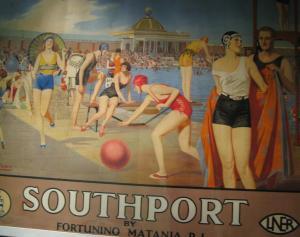 Fortunino Matania’s 1930s commissioned posters of Southport at The Atkinson

Fine Art at The Atkinson

The permanent art collection at The Atkinson is impressive indeed. The collection, begun by a Miss Ball, has a long history dating back to 1879. Since then it has grown to include work by Lowry (Street Scene 1935), Henry Moore, Augustus John (The Red Toque), Paul Nash (‘Vimy Ridge’/1917 by Nash is on display at The Atkinson depicting a landscape devastated by war) and Walter Sickert (the gallery holds ‘The Theatre of the Young Artists’/1890 depicting the theatre in Dieppe).

The Atkinson is notably renowned for its fine selection of portraits and stands as one of the North West’s most acclaimed small galleries! Look out for highlights such as Scillonian Pumps, 1974 by photo realist Maurice Cockrill and the stunning 1930s commissioned Fortunino Matania posters of Southport. The elegance of 1930s resort Southport is captured exquisitely in these posters by the Italian artist.

A prized Goodison Collection of Egyptology inherited from the Bootle Museum & Gallery is also on display and includes numerous rare Egyptian objects. Talks, workshops, special exhibitions and tours run throughout the year. A choice of food and drink options are in-house including the ground floor Bakery with stunning foyer selling artisan Breads, delicious gourmet pies and pre-show meals. A real Ale Bar and Delicatessen are also on-site.

Southport Theatre & Floral Hall Complex on the promenade stands as Merseyside’s largest traditional theatre inclusive of stunning domed ballroom and function suites. The Floral Hall dates from the 1930s and the theatre was added in the early 1970s. Recently refurbished throughout, Southport Theatre hosts an eclectic mix of big musical shows, concerts, comedy, a traditional annual pantomime and more.

Southport festivals and events are year round, featuring a packed programme of music festivals, airshows, flower shows and comedy festivals. The festival season opens in May with the fantastic Southport Jazz Festival. Other top long-standing festivals include the Southport Flower Show, Southport Airshow and the Southport Comedy Festival.