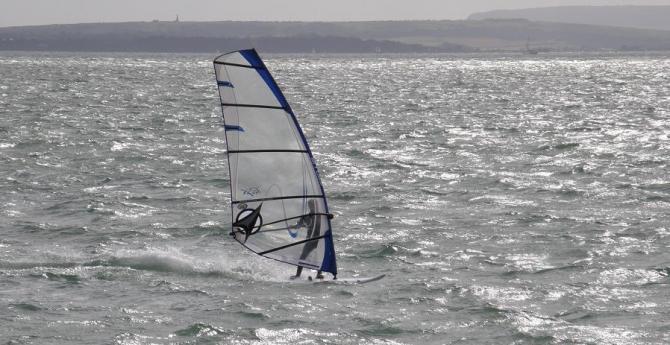 Sunny South Hayling with its best beaches, seaside attractions and watersports makes an excellent summer holiday base. The island is a hotspot for windsurfing, family holidays and holiday parks on the Hampshire coast. Flanking beaches are a choice of amusement centres, fun rides, crazy golf and go-karts. You can also hop aboard the Hayling Seaside Railway, a narrow gauge railway running the entire length of the seafront. The three mile stretch of shingle beach is excellent for all, whether you want to swim, soak up the sun or have a go at a range of watersports. Alongside the beaches are some important wildlife habitats amongst the swathe of grassland and dunes along the beach. Hayling Golf Club has been formed out of the dunes here to create a traditional links course. The habitats on the golf course and Sinah Common are important for a range of wildlife and make an excellent place to walk whether it’s to admire the wildflowers or do a spot of birdwatching.

South Hayling is a centre for windsurfing, family holidays and holiday parks. The three mile stretch of shingle beach is excellent for all whether you want to swim, soak up the sun or have a go at watersports. Right at the end of the main road through the island you’ll come to Beachlands – Hayling’s popular family attraction with its amusement arcades, cafes and takeaways. Next to Beachlands is Funland which has a choice of rides for all ages, together with adventure golf, indoor go-karts, a children’s play area, amusements and a cafe. You can also pick up the seaside railway here – a narrow gauge railway that takes you along the seafront for a mile to Eaststoke Corner.

The charming Hayling Seaside Railway runs all year round on weekends and on designated Wednesday market days and Bank holidays. They depart from the Beachlands area at 11am, then from Eastoke Corner at 11.20am. After this they run every 45 minutes (dependent on weather conditions). Lookout for classic narrow gauge steam locomoties which often pay a visit to Hayling’s railway. Various special demonstrations and events also take place, and you can hire your very own decorated railway saloon carriage for that extra special celebration or birthday treat! 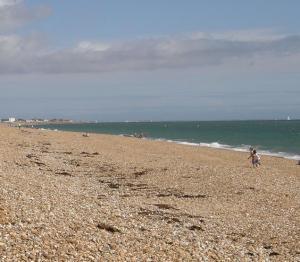 South Hayling is where you’ll find some of Hayling Island’s best beaches. The vast stretch of natural shingle beach that runs along the coast for 3 miles includes two Blue Flag beaches: Central Beach and West Beach. Some areas of the beaches are backed by grassland and dunes and there are a range of facilities such as public toilets, beach huts, picnic tables and kiosks for refreshments available. The beach shelves steeply in some areas where the water can be deep, but at low tide the shallows are suitable for swimming, especially at West Beach.

The most popular part of the beach is that near the Beachlands fun fair and amusements. There is also an adventure playground, volleyball court and BMX and skateboarding park at the West Beach end. It’s a handy spot for families with several refreshment kiosks and cafes nearby as well as the funfair and amusements. Skate board and cycle hire are both available. The beaches at Bound Lane and Chichester Avenue are quieter beaches where dog walking is permitted all year round. There are beach huts, picnic tables and places for barbecues available for public use.

West Beach is the specially designated area for windsurfers and kite surfers. It is widely claimed that windsurfing was invented on Hayling Island in 1958 by a local boy, Paul Chilvers, who at the age of 12, made a board with rudder and sail which effectively saw the birth of windsurfing as a sport. Sheltered by the Isle of Wight the seas off South Hayling are ideal for windsurfing and kitesurfing. West Beach has been set aside for these sports so that other parts of the beaches are safe for swimmers. The waves never become too high and the waters are even warmed by the sheltering effects of a sand bar which also creates waves excellent for jumping. Body boarding and surfing are also popular particularly in front of the last groynes further along the shore. 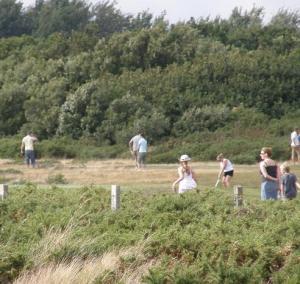 Just behind West Beach is Sinah Common. The grasslands, dunes, heath and shingle in this area are all part of an important wildlife system. At Gunner Point at the western end of Sinah Common sits the most extensive dune system and vegetated shingle in Hampshire. Specialised plants that are able to grow on the shingle include yellow-horned poppy, sea kale, sea radish and sea beet. In the grassland that has formed behind the shingle grades you’ll find bell heather, green-winged orchid and autumn lady’s tresses. The gorse scrub at Sinah Common provides a habitat for a range of birds including the Dartford warbler and stonechat that are often seen in winter. Other birds recorded here include whitethroat, lesser whitethroat, dunnock, wren, house sparrow, greenfinch, linnet, sparrowhaw and kestrel. Just further towards the sea the sand flats at Winner Point provide a fantastic habitat for waders including sanderlings and oystercatchers.

Just behind Sinah Common is Hayling Golf Club. It’s an 18 hole traditional links course that was founded in 1883. The Golf Course is considered one of the best and can be a little trickier when the winds blow in off the sea! The course was developed from the original sand dunes here just as the game of golf was first being developed. The course roughs provide an important habitat for a range of wildlife including the Dartford Warbler that relies on the scrub and heath here. Visitors are warmly welcomed.

The Hayling Ferry runs regular services from the south western tip of Hayling Island over to Eastney in Portsmouth. The ferry runs all year round and is a quick way to cross the water over to Portsea and onward to Portsmouth’s attractions. You can purchase 24 hour return tickets or multi-trip tickets.