The Somerset Levels and Moors is the largest area of lowland wet grassland and wetland habitats in Britain covering 35,000 hectares. They stretch across the lowlands between the Mendip and Quantock Hills and are what is left of a once wider area of flooded fenland. The Somerset Levels have eight rivers and drains running through it: the Kenn, Yeo, Axe, Brue, Huntspill, King’s Sedgemoor Drain, Parrett and Tone. The land here is only a few metres above sea level and is criss-crossed with ditches, rhynes (pronounced reens) and rivers that take the huge amounts of water through the landscape. Glastonbury Tor is the most prominent landmark in the Levels rising up 521 feet. In days gone by this was actually an island surrounded by sea and later inaccessible marsh hence it becoming known as the Isle of Avalon.


Accommodation in the Somerset Levels


The marshes that lie all around Glastonbury and as far west as the coast are collectively called The Avalon Marshes. Shapwick Heath, Ham Wall, Westhay Moor and Catcott Lows wildlife reserves all fall within The Avalon Marshes. Today these wetlands are renowned for internationally important numbers of waterfowl who come here to feed and roost in winter. In summer waders come here to breed and it is one of the best places in lowland England to see breeding waders. Cattle grazing, hay and silage production maintain these large areas of countryside.

The Shapwick Heath National Nature Reserve is an accessible reserve that explains how the Neolithic peoples lived in the marshes 6000 years ago. More recently it belonged to Levington Horticulture who dug the peat for commercial interests. When peat harvesting ceased it was given to English Nature to be managed for nature conservation. Since then water levels have been raised and controlled to assist the colonisation of the peat with wetland species forming reedbeds, swamp, fen and wet woodland. Now Shapwick Heath buzzes with insects during the Spring and Summer months and is excellent for bird watching. If you’re lucky you might even catch a glimpse of an otter!

Beneath the marshes lies the original Sweet Track – the oldest man-made routeway in Britain. This is a wooden walkway that was built in 3,806 BC and crossed two kilometres of reedswamp between Meare Island and the Polden Hills. All sorts of finds have been discovered beside the track including stone axes, flint arrowheads, a bow, pots containing hazelnuts, a toy tomahawk and a jadeite axe from the Alps. The Reserve lies one kilometre from the village of Shapwick and 7 kilometres from Glastonbury. It can be reached via the A39 and B3151 roads. The nearest car park is at The Peat Moors Centre which is about half a kilometre from the Nature Reserve entrance on the same road. 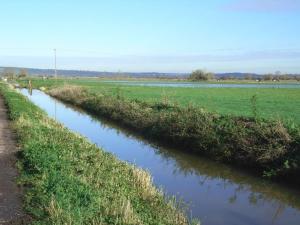 Langport. The Levels & The River Parrett

Ham Wall National Nature Reserve, three miles west of Glastonbury, is owned and managed by the RSPB. It is one of the largest reedbed restoration schemes in the country covering 200 hectares of wetland. Conservation management has enabled reedbed together with wet scrub and fen to colonise old peat cuttings. Ham Wall is one of the prime locations to watch the flocks of millions of starlings coming into roost at dusk in winter. You can also see the starlings coming in to roost at Shapwick Heath and Westhay Moor, managed by Natural England and Somerset Wildlife Trust respectively.

Other birdwatching highlights include bittern who can be heard "booming" in Spring, bearded tits, Cetti’s warblers, reed warblers, swallows, swifts and house martins, gadwall, hobby and other birds of prey who predate the starlings and smaller birds. The site is open all year round and is accessible by all with nature trails along the former Glastonbury to Highbridge railway line, viewing areas, sound and hands-on displays and handrails. Other nature trails extending 3.6 miles take in the site on rougher terrain. Guided walks are available throughout the year. There is a small car park off Ashcott Road for around 20-25 cars. There is a height restriction of 6 foot 6 inches on the car park. Dogs are allowed on the reserve but only on the footpaths and disused railway line. The National Cycle Route 3 run close to the reserve.

On the edge of Langport on Bow Bridge, is the Langport Visitor Centre. The Centre holds an interesting array of displays, exhibitions, including the hands-on "Discovery Room", and useful information about the local area, market towns, events and the River Parrett Trail. Particularly useful information is on walks around the area and a bit about the history of the market towns of the Somerset Levels and Moors. You can also buy your River Parrett Guide from here that contains maps and information on attractions to visit along the River Parrett Trail. You can hire bikes at the visitor centre and head off along the Parrett Cycleway which follows the route of a disused railway line.

The River Parrett Trail is a 50 mile, long distance hiking trail that extends from Crewkerne to Combwich near Steart, just south of Burnham-on-Sea. You can complete the whole trail over 3 or 4 days or break it up as a series of shorter walks during your holiday in Somerset. The trail follows the River Parrett from the Dorset Hills where it starts through the Somerset Levels countryside and characteristic Somerset market towns, ending at its mouth at Bridgwater Bay.

The going is relatively easy as most of the walk is on flat ground. If you want more of a challenge along the way you can have a go at canoeing on the Bridgwater and Taunton Canal or hire a bike from the Langport Visitor Centre and explore further afield. There is a good variety of attractions along the way. Historic towns such as Langport (the River Parrett Trail Visitor Centre is also here) and Muchleney sit alongside the trail, and you can join the Battle of Sedgemoor Trail at Westonzoyland near Bridgwater to find out more about the last battle on English soil.

There is a good range of nature reserves to explore in the heart of the Somerset Levels where you can do a bit of birdwatching, for example at West Sedgemoor RSPB reserve or slightly further inland around Shapwick Heath. You can also find out more about the willow weaving that has been a traditional craft of the area for thousands of years at the Willows and Wetlands Centre at Meare Green Court.