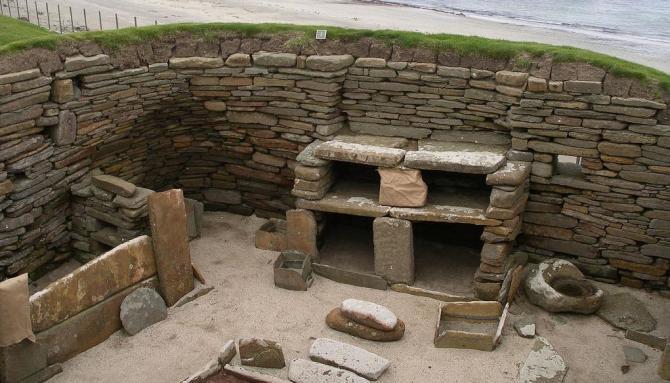 Where is Skara Brae?

Skara Brae is situated on the beautiful, sandy Bay of Skaill, eight miles North of Stromness on the West coast of Mainland, the largest of the Orkney Islands.

What is Skara Brae?

Unsurprisingly, this village site and its surrounding areas have been inspirational for writers and artists over the centuries. Skara Brae is a Neolithic settlement, a cluster of eight stone houses which were likely to be occupied from around 3180BCE to 2500BCE and, unusually amongst Neolithic sites, it is possible to gain a glimpse into the realities of stone age life while standing within the ancient village. This is because Skara Brae is Europe’s most complete and beautifully preserved Neolithic village, being even older than Stonehenge. It recently gained UNESCO World Heritage Site status as one of four Neolithic sites in the Orkneys. 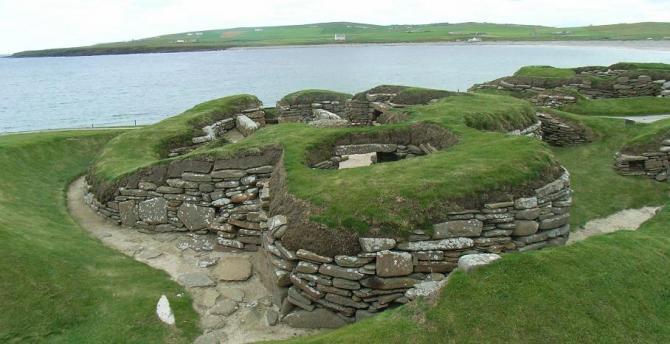 How Skara Brae was rediscovered

Covered by sand over the years, the site was hidden till 1850. But in the Bay of Skiall, a Winter storm which killed over 200 people removed the earth from a knoll called Skerrabra, and a village outline was clearly visible. Excavation began but was slow. Partly excavated, artifacts were plundered in 1913, and when in 1924 another storm swept one of the houses away, it was decided to excavate more fully and to protect the site far more carefully.

The houses measure about 40 square metres each, all with a large square room with its own hearth for cooking and heating and in-built furniture made of stone – cupboards, seats, beds and storage boxes. There was even drainage on the site, and a form of toilet in each home. It is estimated that up to 50 people might have lived at this settlement at any time, making a living from raising sheep and cattle, and also eating seafood and wild vegetation. Although not agriculturalists, it does appear from excavations in 1972 that some barley was grown. 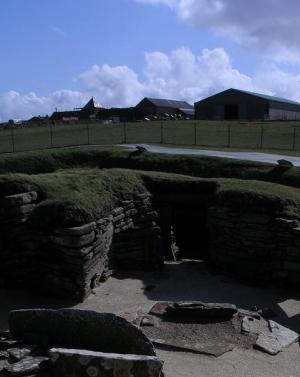 Why the villagers left

There has been some speculation regarding the site being used for magical and astronomical ceremonies by the nearby privileged classes, but it is generally believed to simply be a residential village. The reason for the village’s evacuation is not known, however. It is possible that the Skara Brae residents eventually left due to a large storm. Residents appear to have fled quickly and in some panic as jewellery and other prized possessions were left behind. However, it is also possible that villagers could have left the site gradually, with the covering in sand occuring gradually as the village became gradually forgotten about.

What’s been found at Skara Brae

Beads, carved balls and other items have been found at Skara Brae and other similar local Neolithic sites. Also, red ochre lumps found here indicate that body painting may have taken place. There is plenty evidence of collecting and creativity here with bones and teeth found, also needles, knives and many tools including bowls. Also found was a type of twisted heather rope.

The fact that ancient humans lived on this remote site, and that the site is still accessible and almost complete today, is testament to the strength and determination of the human spirit and inventiveness of their building skills. Another testament to the human spirit in regard to the field of space travel is commemorated here too– a stone was erected at the site in 2008 to mark the anniversary of Yuri Gagarin first orbiting the earth in 1961. 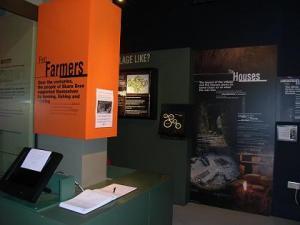 Although you’re not able to walk inside the Skara Brae site buildings themselves, you are free to roam and to look into them and investigate the surrounding areas. Nowadays, the site also houses a visitor centre with cafe, museum and interactive exhibits. There’s also a representation of how one of the houses may have looked at the time it was inhabited. Skiall House can also be visited and is accessible via footpaths from Skara Brae itself.

Where to stay on the Orkney Islands

To visit the Orkneys is truly a pleasure and involves either a flight or ferry from the mainland. Ferries run seven days a week so the islands are not as remote as you might think. The journey is part of the pleasure, with incredible views to be had no matter how you choose to travel. The accommodation we offer on the Orkneys themselves includes self catering farmhouses, crofts, hotels, guest houses and apartments. Why not stay here and take in all the prehistoric sites, as well as all the other pleasures that the Orkneys can offer.