It is impossible to go into much detail here as each and every island has its fair share of interesting walks and unique combination of wildlife to discover, but here are just a few examples of places to go and wildlife to see. Contact tourist information offices for brochures and more information:

The Ness of Hillswick route offers spectacular views from their cliff tops covered in Summer flowers. Evidence of past civilisations is found along the way with Norse and Neolithic remains. And don’t miss the jagged silhouettes of The Drongs, a series of stacks rising up out of the turbulent sea.

The Eshaness circular walk takes you further around the coast starting at Eshaness lighthouse built in the 1920s. There’s handy information at the lighthouse detailing the geology of the area. Views of steep cliffs, stacks, blowholes (gloups), coves (geos) and sandy beaches are some of the most spectacular in Shetland.

The Shetland Islands are well known for their incredible array of wildlife, and interesting botanical specimens. Unst, for example, is a wildlife haven with two National Nature Reserves – the serpentine moonscape of Keen of Hamar and the spectacular cliffs of Hermaness NNR overlooking Muckle Flugga. 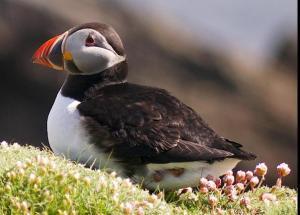 Over on Lunnasting there is more wild walking country North of Lunna. Around Lunna Ness you’ll see the ruins of croft houses left empty from the Clearances in the 19th century to make way for sheep! This is a good area for wildlife watching where in Summer you can see a constant stream of seabirds passing the headland including gannet, common guillemot, razorbill, kittiwake and puffin. It’s also a good place to spot migrant birds such as pied wagtails, waxwings, and redwings.

In Autumn and Spring geese stop here on their migrations. Lunna Ness and the many lochs and streams are good places for otters where there’s a thriving population but they’re somewhat elusive so you may not spot them. Common and grey seals can often be seen on the skerries. 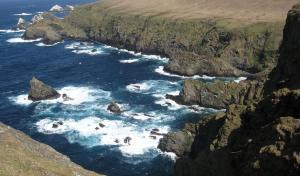 Hermaness on Unst, the most Northerly point in Britain, has a huge seabird population based on the cliffs. With fabulous views to Muckle Flugga, stacks and arches punctuate the swirling seas.

Or try the National Nature Reserve at Keen of Hamer, probably the most unusual reserve in the country as its rare serpentine rock allows specific and quite rare plants to thrive.

The stunning coastline of North Mainland, particularly around the North West Eshaness coast, is well worth visiting for walking, wildlife and prehistory.