The Scottish Grand National is the highlight of the National Hunt racing calendar, and is held in April each year, open to horses aged five or over.

Ayr is home to Scotland’s premier racing track, though it is only comparatively new, being opened in 1907. Prior to this, the racecourse was in the Seafield area of Ayr – this site is now a playing area referred to as the Old Racecourse – and is also part of the Seafield Golf Course.

In fact, horse racing has been documented as being popular in Ayr all the way back to the 1500s. Interest in the sport can be traced back to 1576 with the first organised race being held in 1771. The first Ayr Gold Cup took place in 1804.

Throughout the years, Ayrshire’s landed gentry have supported horse racing both financially and in the breeding of horses. 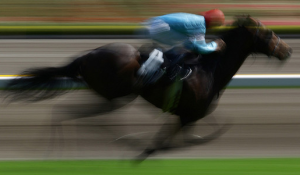 The original Grand National (held in Renfrewshire) sported a three mile course (compared to today’s track which is over four miles and contains 27 fences). In 1966, Ayr hosted the Scottish Grand National for the first time, as Bogside Racecourse at Irvine (the previous venue) had closed the year before. In 1950, the jumps course at Ayr was established, enabling the hosting of the Grand National, and from then on the race site continued to develop till, in the late 1990s, it became obvious that a new owner would need to be found for the racecourse to ensure refurbished facilities and greater investment.

Since that point, over £20 million of improvements have been made, including the creation of and upgrading to the Banqueting and Conference Centre, fine restaurants, private boxes, and improved paddock area and parade ring.

Where to stay in Ayr

We can offer a varied choice of accommodation in the Ayrshire area and throughout the South West of Scotland in general. Whether you choose to stay in Ayr itself, elsewhere on the coast, or a little further inland, there’s plenty of choice for all pockets and all requirements. We can offer guest houses, holiday cottages, hotels, and even caravans and holiday parks, so take a look at our accommodation deals below today.