If you like your seaside getaway with a historic and cultural edge, then Scarborough, credited as the first British seaside resort, won’t disappoint with its spectacular headland castle featuring a 12th century keep and its array of Victorian spa architecture and historic hotels lining the promenade. Visit Scarborough’s internationally acclaimed Rotunda geology museum first opened in 1828 and take a tour of the art gallery housed in a magical Victorian Italianate villa within Crescent gardens. 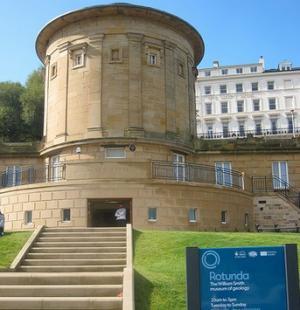 The stunning Rotunda Geology Museum dates from 1828. The designated ‘Father of English Geology’ – William Smith actually came up with the design idea for the Rotunda now restored to its former glory. Geology has long played a part in Scarborough’s history and can be credited with much of Scarborough’s success as an attractive seaside resort. Take the magnesium sulphate in the spa spring waters or the very formation of Scarborough’s headland and sheltered two bays with protected harbour in south bay for example.

The North and East Yorkshire coasts are one of the foremost Jurassic and Cretaceous geological coasts not just in the UK but worldwide. This coastline has thrown up numerous fossils and minerals over the years, many of which are now on display in the Rotunda Museum along with the famous Gristhorpe Man skeleton discovered at Gristhorpe near Scarborough in 1834. Carbon dating on the coffin have dated Gristhorpe Man at somewhere between 1600 and 1400BC!

A Victorian architectural gem, Scarborough Art Gallery housed in an Italianate villa within beautiful Crescent gardens dates from the 1840s. Local Victorian artists are well represented inside including Ernest Dade among others, and work by Atkinson Grimshaw is always on display. Grimshaw spent many of his holidays in Scarborough and Whitby and amongst his work are depictions of Scarborough’s bays with evocative ships on fire or nocturnal and twilight views of the bays. Ever changing exhibitions pull on collections to highlight key Scarborough themes such as the history of tourism in the resort.

The preservation of Scarborough’s many historic buildings and parks gives this Yorkshire coast seaside resort a unique charm. The South Bay area of Scarborough is particularly rich in Victorian architecture. Here along the spectacular Scarborough esplanade sits the famous Spa Complex of theatres dating from the 1880s. Around the town particular architectural highlights include the Rotunda Museum, the spectacular Grand Hotel built in 1867, the historic Spa cliff lift from South Bay which first opened in 1875. Still working today, the Spa Cliff Lift in Scarborough was the very first funicular railway to open in the country. Two other cliff lifts- St Nicholas and Central Tramway are also along South Bay whilst inland the Stephen Joseph Theatre housed in the town’s one time Odeon Cinema dates from the 1930s. Scarborough’s lighthouse in the harbour area dates from 1931 whilst Peasholm Park with its exotic Oriental style gardens first opened just before World War One in 1912.

A 1736 engraving by John Setterington depicts people bathing using bathing machines at Scarborough, and records show that bathing machines were first used in the town in 1735, the very first record of bathing machines in use! Scarborough’s growth as seaside pleasure haven was boosted by the discovery of Scarborough’s Spa waters with their healing properties – Scarborough became one of Britain’s celebrated spa towns. One of Britain’s most spectacular examples of Victorian seaside architecture, The Spa buildings on the esplanade span around half a mile and date from the 1880s. Although the public no longer partakes of the healing spa waters, the original well stills survives beneath the ‘island’ just opposite the Spa shops. Entertainment venues at The Spa today include the Spa Theatre, The Grand Hall hosting regular concerts, the Promenade Lounge, the Ocean Room, the alfresco Suncourt hosting open air (usually free) concerts and a selection of bars and cafes.