Scarborough has two stunning vast sweeping beach bays – North and South Bay. North Bay has Blue Flag status and is nice and sheltered for families with attractions in the North Bay area including the miniature railway, the Sealife & Marine Sanctuary and Peasholm Park.

Bustling South Bay or South Beach is the busiest of the two bays and a real sheltered suntrap facing south as it does and stretching all the way to the harbour. A host of amusements, cafes, beach shops, restaurants and theatres flank South Bay beach.

Quieter and spectacular beaches sit on the outskirts of Scarborough including Cayton Bay Beach just south of Scarborough centre. Flanked by beautiful woodland, Cayton Bay is family friendly and accessible via the walk down from Nipe Point. 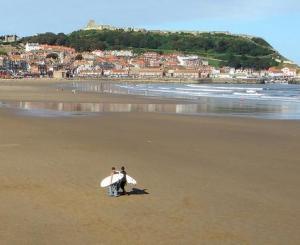 Surfers on the beach in Scarborough

Nudged just between Cayton Bay and South Bay is peaceful Cornelian Bay Beach which even on very hot days remains pretty quiet primarily because it is relatively inaccessible.

Access Cornelian Bay just off the A165 Filey Road down the small road heading towards a Yorkshire Water Pumping Station, then down a wide gravel track with uneven rocks to the beach. At the bottom there is not designated path onto the beach so visitors need to take care here!