Sandown Bay view from The Pier 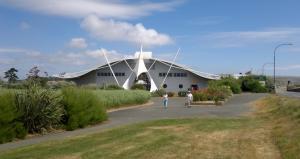 Sandown is the main centre on the island for a traditional seaside holiday. It first became popular with the Victorians who came to take the sea air. The railway link from Ryde made visiting the resort much more accessible and it was so popular that four European monarchs stayed in the town in 1847! With its sheltered golden sands and Victorian Promenade, Sandown has been popular for family seaside holidays on the Isle of Wight for generations. Enjoy watersports on the beach or have fun on the pier with its range of amusements and beautiful coastal views. Some of the island’s top family attractions are located around Sandown including The Isle of Wight Zoo and The Dinosaur Isle Museum.

The seaside resort has plenty of accommodation choices. A family friendly hotel in Sandown town centre is ideally close to the beach, attractions and amenities. Many hotels are attractively modernised Victorian Villas. There’s an 18 hole golf course located close to Sandown and just south of the town centre is an indoor pool complex. Visit Sandown in July during the annual Carnival or in August to see the Sandown Illuminated Carnival and Regatta. Pleasure flights from Sandown Airport offer a unique opportunity to view the Isle of Wight from the air.

Award-winning Sandown Bay is a fantastic stretch of sandy beach bay. The Esplanade flanking the bay is lined with shops, pubs and restaurants. In the summer a road train runs between the town, the Esplanade, Culver Parade and Yaverland. At Yaverland take the footpath up to Culver Down for magnificent panoramic views of Sandown Bay. The Bay is a Blue Flag beach with lifeguards and zoned recreation areas. As it slopes gently into the sea it is ideal for paddling and swimming. Sandown is often cited as one of Britain’s sunniest locations. All this makes it ideal for a family seaside holiday. If you’re feeling a bit more energetic you can take the coastal walk along the coast path or the sea wall prom that stretches for two miles along the coast to Shanklin.

Sandown also has a traditional pleasure pier with amusements, arcades, cafes, dodgems and a theatre. It is 305 metres long, and is open all year round. It was opened in 1887 and in the 1930s a pavilion was added and used as a ballroom and theatre. It escaped bombing during World War II although it was sectioned as a defence measure which led to some deterioration of the structure. In 1968 redevelopment and restoration works began with the demolition of the pavilion at the seaward end as it was modernised. Lord Mountbatten performed the re-opening ceremony on 22nd July 1973. Despite a fire in 1989, the pier has continued to be a popular attraction in Sandown with a host of amusements and attractions including Magic Island playground, a snake slide and an Adventure Golf Course. Pleasure cruises continue to run from the pier and it is also a popular spot for fishing.

The Isle of Wight Zoo on Yaverland seafront holds the largest collection of tigers in Britain. You can also see lions, leopards, jaguars, lemurs, monkeys, snakes, spiders and lizards. The zoo is committed to further conservation of endangered animals particularly tigers and lemurs. Through the Tiger Sanctuary and Lemurland the genetic diversity of these animals is being conserved at the zoo, while funds raised from the zoo’s activities go towards several projects in Madagascar and India aimed at conserving these and other animals in their native habitats. A huge variety of animals are here, and there are regular talks and tours such as the Big Cat Tour, Lemur Feeding and Conservation Talk and Ask the Keeper. Animals are kept in naturalistic enclosures some of which are modelled on actual habitats in the wild. Free parking, a cafe and various shops are all onsite.

Dinosaur Isle was purpose built in 2001 to display a collection of life size dinosaurs and fossils found on the island dating back to 1819. There are over 1000 fossils on display in the building that has been designed to resemble a pterodactyl! An introductory exhibition takes you through the geology and fossils that make the Isle of Wight one of the most important sites in Britain. There are life size reconstructions of dinosaurs, animatronic exhibits with sounds and smells that really bring prehistoric times alive as well as interactive displays, artwork and entertainment. Throughout the year the museum organises field trips to local beaches to look for fossils. The shop on site has a good range of souvenirs, gifts and books on geology and prehistoric life. If you’re inspired to go off exploring on your own, the geological exposures at Yaverland are nearby.