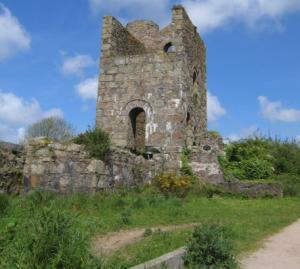 Redruth in the heart of Cornwall’s mining World Heritage landscape is an urban centre in a valley surrounded by the scenic hills of Carn Brea (Cornish for rocky hill), Carnmarth and Carnmenellis. The town sits alongside the Great Flat Lode, one of the many Mineral Tramway Trails which criss-cross the World Heritage Site and are popular for cycling, walking and horse riding. Portreath and the magnificent beaches and coastal walking along the Godrevy Heritage Coast are a mere 3 miles away, and in the town centre heritage trails take in fascinating civic architecture, the grand houses of former mine owners, restored miner’s cottages and landmarks like the large Pednandrea chimney which has stood at the top of Redruth town since 1824.

You can find out more about Redruth, the historic capital of Cornish Mining, at family friendly Treasure Park with onsite Mining Museum, located between Redruth and Portreath along the Tolgus Trail Mineral Tramway. Town trail guides and information on surrounding Tramway Trails and mining heritage sites are also available at the Redruth Visitor centre on Alma Place in the centre. 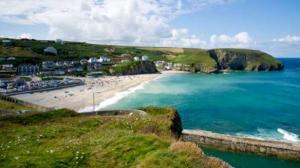 The Mineral Tramways network is great for family cycling and walking, and Redruth is just minutes from great beaches around Portreath and St Agnes, popular for family surfing and bathing. Don’t miss a visit to Redruth’s free entry Treasure Park and Town Museum on the site of old Tolgus Mill tin mine. Attractions here include outdoor play areas, gardens and footpaths including the Tolgus trail, tours of the old tin mine, a mighty water wheel and fascinating displays as well as cafes, free parking, restaurants and craft workshops. Grade II Listed engine houses around Redruth like Wheal Peevor are surrounded by stunning countryside with cycle trails and picnic areas.

Kids will love the family trails and interactive activities like panning for ‘gold’ and dressing up at King Edward Mine and a tour of the mighty beam engines at East Pool, in action daily. A scenic 10 minute drive from Redruth sees you in Portreath on the coast with its family friendly sandy beach, pretty harbour and choice of shops, restaurants, cafes and inns. Portreath is also linked to Redruth by the Mineral Tramways trail. Follow the route of the Cornish Way east out of Redruth and in just under one mile you’re at Gwennap Pit, a spectacular open air amphitheatre. 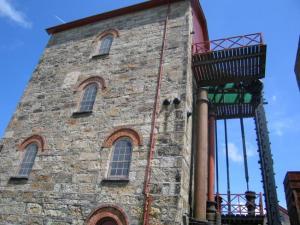 Pioneering inventors from William Murdock to Richard Trevithick were attracted by the mining industry in Redruth during the 18th century. Various museums and mine sites in the area dig deep into this rich and proud heritage including the award-winning King Edward Mine Museum along the Great Flat Lode Trail near Redruth and the National Trust’s East Pool Mine. Head off on a trail up to the top of Carn Brea with castle, monument and spectacular views of the surrounding countryside and mine sites. Redruth sits at the very centre of the Mineral Tramways multi use mining trails – a 60km network of coast and country trails taking in some of the best of Cornish heritage mining landmarks. Many of these trails follow the route of old railways and tramways.

To the north of Redruth town centre at Tolgus Mount sits the Moseley Toy and Train Museum, home to a working engine once in use at nearby South Crofty Tin Mine. A great family attraction, this museum located at Tumblydown Farm features an interesting collection of toys, historic model railways, galleries with displays on the history of surrounding mines, and an outdoor 24″ gauge industrial railway. Some of the restored engines running on the line were once used in local mines. The museum is also home to a steam driven replica of the Murdoch Flyer. Redruth’s most famous son, William Murdoch, was the first to design and construct a steam driven road vehicle!

Gwennap Pit just south east of Redruth is a famous site within Cornwall’s World Heritage Mining landscape. Subsidence probably caused by mining activity here resulted in the formation of a natural open air amphitheatre which was used as a meeting place by Methodists. The founder of Methodism, John Wesley, preached here 18 times between 1762 and 1789. Still owned by the Methodist church and used for gatherings and events, Gwennap Pit is open to visitors daily through the year, with a visitor centre selling books, souvenirs and refreshments. The site is along the Cornish Way (National cycle route 3), accessible by bike through beautiful rural scenery from Redruth. 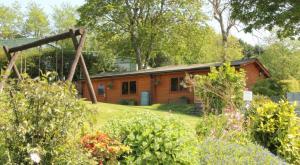 Redruth is easily accessed by road and rail, located just one mile off the A30 dual carriageway. Redruth station has fast rail links to London Paddington. The town’s location in the Central West of Cornwall makes it ideal for exploring – within an hour’s drive of popular Cornish attractions and locations. Newquay, Marazion and St Michael’s Mount are within a 30 minute drive and St Agnes, Portreath, The Towans beaches and Perranporth are within a 15 minute drive. 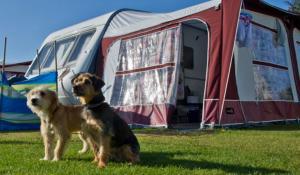 The Redruth and Portreath has an outstanding choice of accommodation including award-winning family holiday parks, welcoming country B&Bs near heritage mining sites, luxury cottages, lodges and apartments and pet friendly touring and camping parks near beaches and Mineral Tramway trails. Tehidy Holiday Park between Redruth and Portreath is a multi award-winning holiday park with a choice of luxury cottages and caravans, glamping, tourer and camping space onsite, as well as walking and cycling trails, play areas, a games room and shop. Stay in elegant guest houses in the Tehidy area, or a welcoming farm B&B at Tolgus Mount near the Moseley Toy and Train Museum. Clustered around the harbour and best beaches at Portreath you’ll find spacious beach houses and luxury sea view cottages perfect for families.