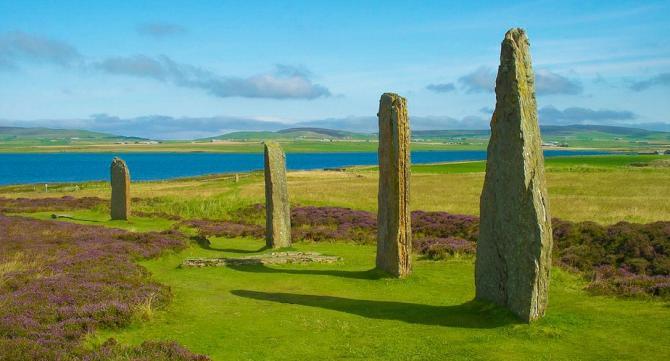 The Orkneys are brimming over with historic sites – most of them at least 5,000 years old.

West Mainland stretches from Kirkwall to Stromness and incorporates everything North and South of those towns. It has a strong concentration of the most famous Neolithic sites plus many more less well known ones that are still accessible. This is only really the tip of the iceberg as many sites have still to be excavated and explored.

From famous and large sites like Skara Brae, the Ring of Brodgar and Stones o’Stenness, and Maeshowe, to smaller, less accessible sites, there’s something for all interest levels. Some charge too, so check with the tourist information offices to see if it might be worth your while purchasing an explorer pass. Here are just a selection of some of the more well-known… 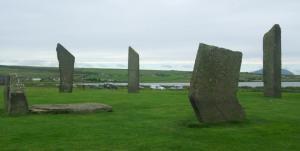 On the North-heading road from Stromness, the Stones o’Stenness, and nearby Maes Howe, Barnhouse Stone, the Watchstone, are worth a visit. Maes Howe, a Neolithic Chambered Tomb, and probably the finest in North-West Europe, is more than 5,000 years old. Apparently raided by Vikings, it is nevertheless surprisingly intact, with its Viking graffiti, runes and all!

The Ring of Brodgar further up the B-Road from the Stones O’Stenness has a car park across the road from the site and there’s a pleasant walk around some sweet-smelling fen, across the road and up to the heathland site where you can clearly see the ring of 27 stones that make up this stone circle. Their actual date is uncertain but it is believed they were erected between 2500 BC and 2000 BC and would originally have been made up of 60 megaliths. The RSPB own the land adjacent to the site and have cultivated this as a traditional hay meadow in which are a huge diversity of flowers, beautiful in the Summer.

Brough of Birsay and Broch of Gurness

Situated on the North West coast of West Mainland these two important Neolithic sites are great for visiting. The Brough of Birsay, a small island just offshore, is accessible via a causeway that’s only accessible at low tide. With rock pools en route, and remains of a Pictish/Viking/Norse settlement this island is also topped with a Stevenson lighthouse and boasts some great views and walks too.

Over on the North East coast near Evie is the Broch of Gurness, set beside a seal-filled sea with views of Rousay and Wyre islands. The site contains a broch and associated village that dates from around the 1st century AD; a spiral staircase being the first part accidentally discovered in 1929.

Just North of the Italian Chapel in Lamb Holm is the Iron Age Mine Howe, with its two steep staircases leading to a subterranean chamber with a high roof. There are also two side chambers. Theories as to its purpose have been varied – perhaps an above-ground building used to exist too or perhaps there were spiritual motivations for its construction?