The Holy Island of Lindisfarne at dawn

The Northumberland Coast Area of Outstanding Natural Beauty (AONB) is one of England’s Heritage Coasts, home to ancient landmark The Holy Island of Lindisfarne and the magnificent coastal castles of Bamburgh, Dunstanburgh and Warkworth. Spectacular sandy beaches, off shore islands, world class coastal golf links and nature reserves line the coast, dotted with pretty villages and small towns like Amble, Craster, Seahouses, Almouth and to the far north the border town of Berwick-on-Tweed. Much fought over, Berwick is famous for its Elizabethan Ramparts Walk, great local produce markets and shops and arts scene centred around The Maltings. Pick up boat trips to off shore islands from Seahouses and Amble, and enjoy the best of the coast’s watersports in hotspots like Beadnell and Amble.

The Holy Island of Lindisfarne

The Holy Island of Lindisfarne, a tidal island cut off twice daily by the tides, was the home of St Cuthbert who was Bishop of Lindisfarne from 684 to 686 AD. After St Cuthbert’s death Bishop Eadfrith wrote The Lindisfarne Gospels here – you can view an internactive copy of the text in the Lindisfarne Heritage Centre on the Island. On the island you’ll find a choice of specialist gift shops, inns, restaurants, cafes and pleasant family friendly and dog friendly walks. Don’t miss a tour and tasting session at St Aidan’s Winery, producers of the delicious Lindisfarne Mead!

Berwick-upon-Tweed bordering Scotland is a ‘Cittaslow town‘, part of an international collective of small towns which place an emphasis on distinctiveness and quality of life for both visitors and residents. Local produce, weekly markets and independent shops feature strongly around the town centre and many beautiful heritage sites are here including the Elizabethan rampart walls and a Georgian barracks. You can walk the entire length of the Berwick walls which surround the town, taking in panoramic views of the sea and the River Tweed en-route. The Berwick Barracks were designed by Nicholas Hawksmoor and contain the Berwick Museum & Art Gallery and a Regimental Museum. Berwick also boasts a fantastic arts scene centred around the Maltings Theatre, Film & Arts Centre. The annual September Film & Media Arts Festival is a great time for a short break in the border town.

BAMBURGH village was once the mighty stronghold of the ancient kings of Northumbria and is dominated by magnificent Norman Keep of Bamburgh Castle on a rocky plateau. Stunning views towards Holy Island and the Farne Islands can be seen from the award-winning, endless sands of Bamburgh beach and best coastal walking is between Bamburgh and Seahouses.

ALNMOUTH village is the ultimate retreat with an arts edge. A great time to visit is during the Alnmouth Arts Festival annually in late June. Alnmouth is a coastal and riverside village along the River Aln and has a spectacular sandy beach popular for horse riding and coastal walking. Golf, walking and cycling are all popular in the area and the village has an excellent choice of quirky shops, inns, restaurants and cafes. 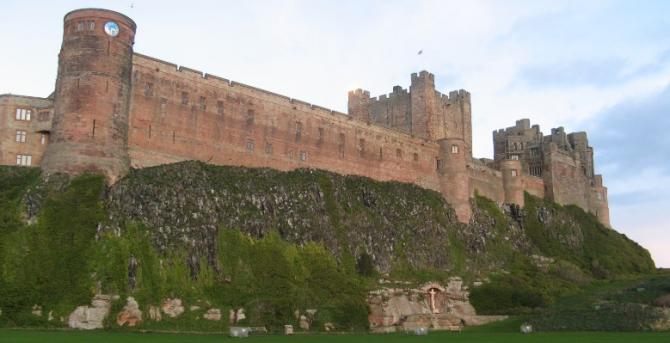 WARKWORTH village is dominated by Warkworth Castle, one of the mighty strongholds of the Northumbrian Percy family. The castle’s late 14th century Keep is one of the best preserved in Britain. More heritage sites here include the late medieval Warkworth Hermitage Chapel accessible only by boat across the River Coquet. Nearby coastal village AMBLE, with its pretty harbour and award winning marina is a top spot for watersports including surfing, sailing and canoeing.

CRASTER village is within walking distance of the ruins of Dunstanburgh Castle via the coast path. The village has a picture-postcard tiny harbour and is famously home to Craster Kippers, traditionally smoked in Craster by the Robsons for well over a century. Beyond Dunstanburgh sits the beautiful beach bay at Embleton and Low Newton villages, and you’ll find ancient Stone, Bronze and Iron Age sites flanking the coast just south of Craster near Howick. In Howick take a tour of the historic home and magical gardens of the Grey family – Howick Hall Gardens. The Grey family were famously the first to blend Earl Grey tea!

Seahouses and Beadnell are great holiday bases for families and watersports holidays. Both offer a superb choice of family friendly cottages and holiday parks. You’ll find ample shops, amenities, restaurants and a choice of boat trips to the Farne Islands in bustling Seahouses. Family cycling and crazy golf are popular and it’s a gentle stunning coastal walk just along the coast to the family friendly Bamburgh Castle attraction.

Beadnell Bay and harbour is a top spot for diving, sailing, kite surfing, windsurfing and surfing. A sailing club is located at the harbour. A selection of shipwrecks sit off Beadnell Bay as well as just to the north around the Farne Islands and Seahouses. These wrecks combined with the beautiful clear waters in the area make both Beadnell and Seahouses excellent diving locations on the Northumberland Coast. Well preserved 19th Century lime kilns can also be seen in Beadnell and Seahouses harbour – another is located on Holy Island.