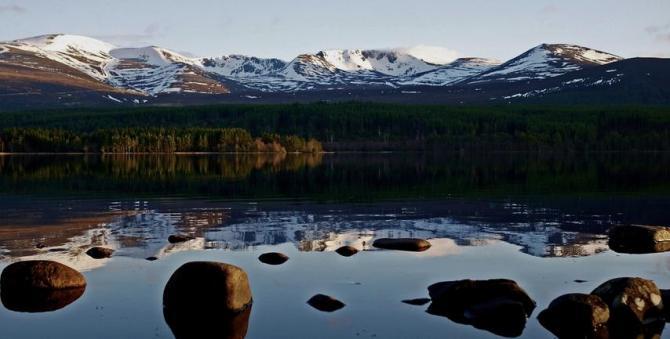 The North East of Scotland is a large triangular geographical region which covers most of the North East of Scotland with the exception of the coastal areas from Nairn to Dundee, but encompassing such inland towns as Turriff, Dufftown, Forfar and Elgin. Comprising Angus, the inland parts of Moray, the Cairngorms National Park and Grampian Mountains, this is a geographically varied region of farmland, mountains and wooded glens.

Well known for its mountainous areas – particularly the Cairngorms and Grampian mountains – equally typical in North East Scotland are its good-sized, lowland, shopping-friendly towns like Inverurie and Banchory, many built round the still-thriving whisky industry and the clear fresh water. The Grampian Mountains and Cairngorm National Park punctuate the region’s skyline to the South and West.

The Cairngorms National Park is an enormous national park well known for its incredible beauty and facilities for water and snow sports. Why not try kayaking, sailing, yachting or water ski-ing on Loch Morlich, or scaling some of the most inspirational peaks in the country? And, for more down to earth activities, the Cairngorms are a haven for bikers and walkers who return year after year. Speckled with lochs and laced with rivers, the moorland and farmland is teeming with wildlife and the Rivers Spey, Findhorn and Dee are well known as world-quality salmon and trout fly-fishing locations.

If outdoor sports aren’t quite your thing, perhaps you would prefer to visit Ballater, a Victorian village known as the ‘Jewel of the Cairngorms’ or one of the other charming villages and towns nearby?

Morayshire, to the North West of this region, is home half of Scotland’s distilleries and runs the world’s only official Malt Whisky trail to visit eight distilleries (amongst them Glenlivet, Glen Moray, Glenfiddich, and Cardhu), a whisky museum and cooperage.

From local highland games held all over the region in such towns as Turriff and Strathdon, to many heritage centres/shops, for example in Braemar, where the visitor can purchase clan/heritage/tartan items, there’s plenty of opportunities for the visitor to immerse themselves in Scottish culture and tradition. Or visit the Alford Valley Railway, Scotland’s first 2ft narrow gauge railway for passengers.

And for those visitors whose interests are more historic – there are a large number of castles to discover in this region including, of course, Balmoral!

How to get to North East Scotland

North East Scotland is linked to the main UK motorway network from the M90 at Perth. From there into the main part of the North East, the main towns and villages are accessible via a reliable network of A roads, leading to the North West of the region, and to the more coastal areas. Both Aberdeen’s airport at Dyce, and Inverness Airport are easily reached by car, as are airports at Dundee, Edinburgh and Glasgow. The area is also well served by rail links.

Where to stay in the North East of Scotland

We are proud to offer delightful accommodation in the area, mainly in the form of self-catering cottages and hotels to suit all budgets and tastes. Whether you’re looking for something traditional or contemporary, a couples retreat or a base for a busy and active family holiday there’s sure to be plenty of interest on our lists below.