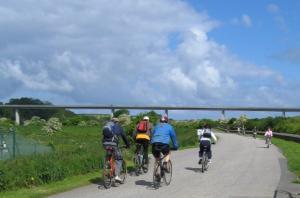 Cycling on The Camel Trail, Wadebridge

North Cornwall’s Atlantic Coast around Padstow, Hayle Bay and Bude is home to some of the UK’s best beaches, coastal walking and golf links. Inland is a varied landscape of gentle river valleys and rolling hills beloved by the poet Sir John Betjeman. Bodmin Moor is popular for a variety of outdoor activities and mixed landscapes include pretty ancient woodland to the south, great granite outcrops to the east and rugged Tors in the north. North Cornwall is packed with scenic walking trails, cycle routes and on the coast some of Cornwall’s best surfing beaches at Bude, Padstow Bay, Polzeath and Constantine Bay. The area is incredibly popular for family beach and activity holidays. Numerous all inclusive holiday parks, family cottages and lodges are across North Cornwall’s coast and countryside.

Ancient market towns include old Cornish capital Launceston, once a mighty powerhouse with an impressive ruined castle affording wonderful views of the Tamar and surrounding countryside from the top of its Round Tower. Launceston is brimming with quirky craft shops, old inns, Georgian architecture and gift shops with cafes. Some of best seafood in the UK can be sampled here in North Cornwall – one of the reasons top chef Rick Stein has a number of eateries in pretty Padstow flanking the Camel estuary. 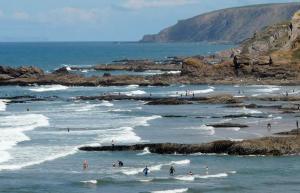 If you’re a lover of best surfing beaches, quaint villages, great locally sourced food and drink and dramatic coastal castles, the North Cornwall Coast won’t disappoint. Bude close to the Devon border is one of Britain’s top surfing resorts featuring a mix of gentle and more challenging surf territory on its spectacular beach bays. There’s even an open air natural pool right on the beach at Summerleaze. The beach bays of the North Cornwall Coast are legendary award-winners, including the most famous ones Constantine Bay, Widemouth Bay, Port Isaac Bay, Crackington Haven, Harlyn and Polzeath and Padstow Bay.

Places to Stay around Polzeath

Medieval harbour village Boscastle with its little Witchcraft Museum is a picture-postcard gem containing fine old inns, gift and craft shops and some charming B&Bs, inns and cottages. Not to be missed is a tour of the ruined Tintagel Castle and village. The castle on an island accessed via steps from the mainland has long had associations with King Arthur, and the village is a popular holiday base with its friendly real ale inns, cafes, B&Bs and Old Post Office.

Premier golf courses, moorland with unique granite rock formations and ancient market towns and villages are plentiful inland in North Cornwall. Bodmin, Camelford and Wadebridge all make great bases from which to access beautiful Bodmin Moor from the west or stay in ancient Cornish capital Launceston on the eastern side of Bodmin Moor, also affording easy access into the Tamar Valley Area of Outstanding Natural Beauty. North Cornwall is great for family holidays. The region is home to top family attractions including Crealy Adventure Theme Park near Wadebridge, the Bodmin & Wenford Railway and Dingles Fairground Heritage Centre near Launceston.

Rich in smuggler’s heritage, Bodmin Moor is Cornwall’s great inland natural landscape, dotted with breathtaking rock formations and ancient monuments including the famous Minions sites on the eastern side of the moor such as The Hurlers and The Cheesewring. The remains of old mining engines mingle with granite rock formations and Bodmin Moor offers numerous outdoor activity opportunities from walking in Golitha Falls woodlands to caving in the caverns of the south and horse riding around the mighty Tors in the north. 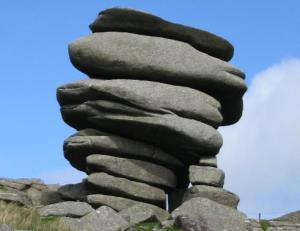 The Cheesewring granite rock formation near Minions in Bodmin Moor

Getting to North Cornwall by road is easy via fast access roads off the M5 from Exeter. Exeter and Newquay Airports are within easy driving distance. Great Western railway stations are at Bude and Bodmin Parkway, and all the major centres including Bodmin, Bude, Wadebridge and Launceston have good bus links into the wider region. Whether you’re searching for a surfer friendly B&B and apartment or a family cottage near the Camel Trail, find them here on iknow-cornwall. North Cornwall offers an exceptional choice of cottages along the coast and inland around Bodmin and the Tamar Valley. Book a boutique hotel gem in Port Isaac or a luxury villa retreat around Padstow. Eco-friendly and character Victorian B&Bs aren’t hard to find in picturesque market towns and ancient villages like Boscastle.