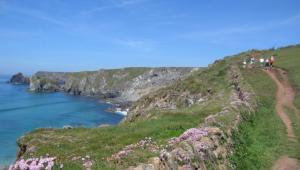 Walking around the Lizard Peninsula coast near Kynance Cove

Unspoilt Mullion village sits around 1 mile inland from Mullion Cove and historic Mullion harbour (a working fishing harbour) on the Lizard Peninsula coast. Flanked by two river valleys and surrounded by beautiful rural scenery, the village is a real retreat close to spectacular coastal walking along the South West Coast Path around the Lizard. Famous Kynance Cove, one of the world’s most beautiful beaches, is also just a short drive or scenic walk from the village. Predannack Downs just south of Mullion is within the Lizard National Nature Reserve and is renowned for its plant life and wetlands rich in wildlife. The Mullion Head area offers great opportunities for birdwatching and Mullion Island (also known as Toldhu) situated half a mile offshore to the west of the harbour is home to a colony of seabirds. The Lizard coast around Mullion is famed for its serpentine rock which is polished and sculpted into various souvenirs available to buy in local craft shops.

Mullion Cove was a popular haunt with smugglers in the past. In 1801 the smuggling problem was such a concern that following an infamous gunfight with the crew of H.M. Hecate, the King’s Pardon was offered to any smuggler who was prepared to reveal the identity of the men who participated in the showdown. At this time the locals were known to trade openly with those bringing in contraband by sea. Today Mullion Cove beach and the pretty harbour between Poldhu and Kynance is a peaceful haven. On the road between the village and cove sits a popular Chocolate Factory and Craft Centre with chocolate shops, art galleries, a coffee shop and glass workshop. This area of the Lizard is perfect for golfing breaks – Mullion Golf Club spectacularly situated on the coast is a real challenge and has far reaching views from the Towans towards the cliffs, beach and Gunwalloe Church.