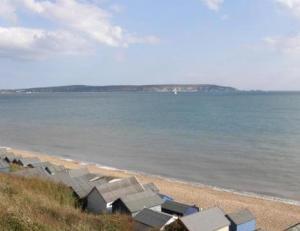 Views across to The Needles on the Isle of Wight

Milford-on-Sea is a historic seaside village that has retained much of its character, particularly in the village centre. It grew on the harvesting of salt for the nearby Saxon monasteries. The village centre is lined with historic listed buildings, inns and cafes. A large public car park flanks the shoreline of beautiful Milford beach and the cliffs here stretch from Milford, west to Highcliffe in Dorset. Many plant and animal fossils have been unearthed in these cliffs including the fossils of turtles, lizards, snakes, crocodiles and birds offering a fascinating insight into the types of animals that once inhabited these shores and how they have evolved over time.

The beach is safe for bathing and you can enjoy plenty of boat trips in the area around Hurst Castle and to the Isle of Wight. Take a scenic stroll around Braxton Gardens before enjoying lunch at their pretty tearoom. Other activities include walks down to Hurst Castle around three miles away, or along the seawall to Lymington which is five or six miles each way. Geo-caching walks are also a popular pastime along the New Forest Coast. For longer walks, the Solent Way Long Distance coastal walk passes through the town. After a day relaxing at the beach, enjoy a meal of delicious freshly caught seafood at one of the town’s restaurants or a drink at one of the friendly local pubs. The Smugglers Inn on the High Street is particularly great for families with a large beer garden and play area. Dogs are welcome too!

Milford-on-Sea has a long sweep of pebble beach fringed by pretty beach huts. The views are fantastic looking across to the Isle of Wight and looking west you can see Christchurch, Bournemouth and Poole on a clear day or at night when it’s all lit up. The beach is bordered by a large pay and display car park and a wide promenade with benches. Milford-on-Sea beach is dog friendly and cleaned during the summer. There are toilets nearby and cafes near the car park. You’ll find many more cafes, restaurants and pubs in the village within easy walking distance.

Milford-on-Sea is along the Blue Route of the New Forest Bus Tour which runs daily across the summer season. If you’re holidaying in Milford it’s easy to explore New Forest attractions and walking/ cycling trails via the scenic open top bus tour. The Blue Route stops at Milford-on-Sea, Lymington, Brockenhurst, Burley and Barton-on-Sea.

The Solent Way starts at Milford-on-Sea. The path takes you along the entire length of the Hampshire coast from Milford-on-Sea to Emsworth Harbour in the far east of the region. It runs for 60 miles along the Solent coast taking in some of the country’s most important naval history sites as well as pretty, historic harbours like that at Lymington. The route is waymarked with a seabird on a green background.

From the beach at Milford-on-Sea you can walk one and a half miles along the shingle to Hurst Castle. Located at the end of a shingle spit, Hurst Castle was one of a string of coastal fortresses built by King Henry VIII and in its day it was one of the most advanced artillery fortresses. It was completed in 1544 and built to defend the western approach to the Solent. Later Charles I was imprisoned here prior to being taken to London for trial and subsequent execution. Additions came during the Napoleonic Wars and in the 1860s when two extra wings were added to house 38 ton guns. You can get some spectacular views from the castle along the Solent and over to the Isle of Wight that only lies three quarters of a mile offshore.