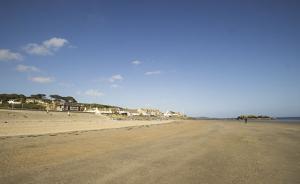 Marazion is an ancient traditional market town around Mounts Bay widely regarded as one of the world’s top ten most beautiful beach bays. Pretty cottages, apartments, small independent hotels and guest houses around the market town boast views across to the island castle of St Michael’s Mount, and beyond towards nearby Penzance, Newlyn and Mousehole. Marazion offers an idyllic peaceful base, with plenty of opportunities to get active if you wish. Sailing, horse riding, windsurfing and magnificent coastal and inland walks all feature in the area. You’ll also find a good choice of outdoor activity centres dotted around Mounts Bay offering tuition for activities such as kitesurfing and surfing. Mounts Bay regularly hosts international sailing and windsurfing competitions. Clean sandy beaches in the Marazion and Mounts Bay area include some of Cornwall’s most beautiful beaches, all offering safe family bathing with glorious coastal views. Marazion itself has two beautiful beaches. Wildlife lovers won’t want to miss a visit to RSPB Marazion Marsh on the outskirts of the town. The reserve overlooks St Michael’s Mount and is home to Cornwall’s largest reedbed and over 250 species of birds including bitterns who now regularly winter here.

The market town is popular with artists and in the centre you’ll find a collection of superb art galleries, gift and craft shops, an antiques shop and jewellery shop along with a general store selling essential groceries. Marazion has several first class inns serving fine food and Cornish ales, and some excellent hotel restaurants with views of The Mount which are open to residents and non-residents. The town is well served by a local bus service making it easy to leave the car behind and head off to explore nearby Penzance. Marazion is ideally placed for touring, situated just 3 miles from Penzance, 6 miles from St Ives and 13 miles from Land’s End. World famous beaches and attractions in the Far West including Porthcurno beach and the Minack Theatre are an easy drive away.

Known locally as ‘The Mount’, St Michael’s Mount is the ‘Jewel in Cornwall’s Crown’, famous as the official residence of Lord St Levan and owned by the St Aubyn Family. The Mount is one of Cornwall’s most famous attractions and sits just half a mile offshore, accessible by boat from the harbour. Alternatively walk in the footsteps of pilgrims and cross the causeway on foot when the tide is out. Things to do and see on the island include the castle and small village with cafe and charming shops, all surrounded by sub-tropical gardens. A trip to the summit of the castle island is a highlight with magnificent views across Mounts Bay.

Take a tour of the little Marazion Museum housed in the ground floor of the Town Hall with an exhibition exploring the fascinating history of this ancient market town which before the late medieval era was much more of a major centre in Cornwall than neighbouring Penzance. The museum is open on weekdays during the summer season and you can pick up printed guides to the Marazion Town Trail here. Fishing and mining were once major industries in the Marazion area. Several tin mines were located around the town including Wheal Crab, South Neptune, Wheal Rodney and Tolvadden, all active until the decline of the copper and tin mining industry in the late 19th century.