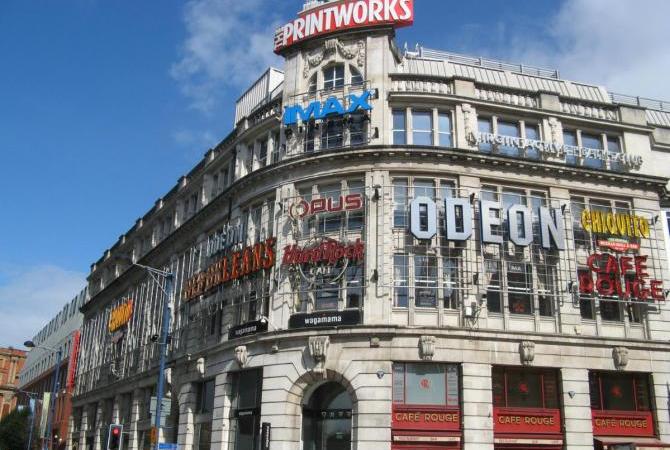 Film fans will find plenty to please in Manchester, a northern city with an exceptional choice of cutting edge cinemas in and around the centre. Manchester’s hub venue for independent film and contemporary visual arts is the superb Cornerhouse on Oxford Road which first appeared on the scene in the mid 1980s and has prestigious patrons including Danny Boyle, Helen Mirren and Damien Hirst.

Right in the heart of the city centre sits The Printworks, an all inclusive entertainment venue with the largest IMAX cinema screen outside of London. A mammoth 20 screens in total are here offering the ultimate digital experience. Other top cinema venues in and around the city include a Vue cinema at the Manchester Lowry Outlet and the Odeon with 20 screens at the Trafford Centre.

Manchester’s premier centre for independent and world cinema, The Cornerhouse on Oxford Road has three film screens, a selection of contemporary art galleries across three floors, a chic bar, popular cafe and a small film bookshop. The Cornerhouse also hosts high profile annual film festivals and events such as the Viva Spanish and Latin American Film Festival each year in March.

Year round themed film seasons and mini-festivals feature here at the Cornerhouse including screenings of the best new queer cinema, New British Cinema Quarterly, classic Hollywood cinema and collections of screenings around key cinematic genres such as film noir.

Film courses open to all also run through the year, with subjects including introductions to film studies, documentary and more. See innovative modern art exhibitions at the Cornerhouse, often with a local Mancunian theme and focus. These run through the year in the venue’s art gallery spaces. If you’re looking for a unique conference or meeting venue, many of the gallery and cinema spaces at the Cornerhouse are available to hire, all with cutting edge AV equipment available and a superb choice of on-site catering options.