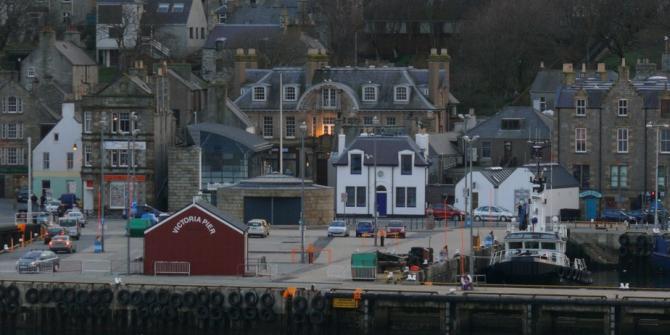 Mainland, Shetland, is a large island shaped almost like a horizontally pointing finger which makes up the largest part of the land mass of Shetland. In fact, Mainland is the third largest of the Scottish islands. 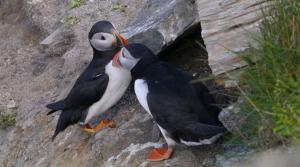 The South of Mainland is largely farmland and moorland, though those interested in prehistory will find many archaeological sites of interest here – take a look at Scalloway too for remains of Second World Wara bases, the Shetland Bus expeditions and the Scalloway Museum. Or take a boat trip from Lebitton Pier then visit Hoswick’s knitwear factory and visitor centre. Fans of lighthouses will love Sumburgh Head and its Robert Stevenson-engineered lighthouse, seabirds and Jarlshof – the neolotichic site. And, from Bigton, you can see over to St Ninian’s Isle and Burra.

The North of Mainland is where you’ll find the Northmavine peninsula, dramatic coastlines, and more moorland. The Sullom Voe oil terminal can be found here too, as can be found the villages of Brae and North Brae (they host thier very own Up Helly Aa festival) and Vidling.

Mainland’s Eshaness cliffs are magnificent and imposing, but the beauty of Mainland, and of the Shetlands in general, is the wild charm. The festivals, the friendliness, the clear air and simple beauty are what attract visitors to the Shetland Islands.

Central Mainland is where the main Shetlands settlement of Lerwick can be found. Being the principal port of the Shetlands, the main hub of activity, and location of most of the Shetlands’ shops, this island capital positioned 100 miles from mainland Scotland, attracts most of Shetland’s visitors initially. Some then dissipate to other islands and locations, and others choose to remain in the burgh. While in Lerwick take a look at the Shetland Museum (see our page link below) and Fort Charlotte, a "five-sided artillery fort". And if you’re in the mood for some entertainment, try the Mareel Arts Centre for music, cinema, theatre and more… 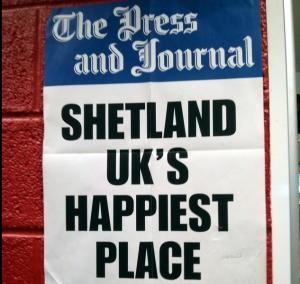 How to get there and where to stay

The major settlement on Mainland, Lerwick, is the hub of ferry, air and road connections. Tingwall Airport is only a few miles away, and Sumburgh Airport a little further South offers a year-round service to a number of island and Scottish mainland locations. Ferry services run from Aberdeen and Scrabster in the North of Scotland to the Orkneys and Lerwick. Buses navigate the island, and though the services aren’t always as regular as you’d expect in less rural locations, the services are reliable!

Mainland does provide the majority of our Shetlands accommodation. Mainly hotels which are guaranteed to make your stay a happy one, your family are sure to have the best and most relaxing holiday possible if you book a stay with us. So browse our lists below, book with us and enjoy your stay!