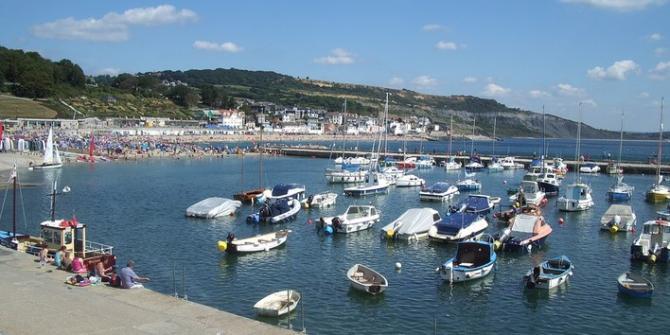 Lyme Regis on the World Heritage Jurassic Coast nestles at the mouth of the River Lim in-between the Undercliffs National Nature Reserve to the west and the Blue Lias fossil rich cliffs to the east. Famous for its Cobb harbour, Lyme is where Dorset meets Devon on the Heritage Coast and was at one time a major trading port. The Duke of Monmouth landed at the harbour in 1685 – an event which saw the start of the Monmouth Rebellion against James II. The Old Town is brimming with independent shops, galleries and a choice of fine old inns, cafes and restaurants. Lyme Regis also has a beautiful late Art Deco cinema in the ‘streamlined’ style. Sympathetic renovation has retained almost all of this Grade II Listed seaside cinema’s original features. More great entertainment is on offer in another of the town’s historic gems, The Marine Theatre, Lyme Regis’ ‘little theatre by the sea’. 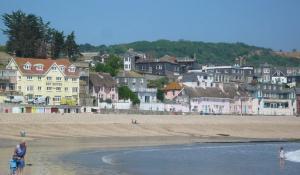 The Cobb harbour wall was dramatically featured in the film ‘The French Lieutenant’s Woman’ starring Meryl Streep. The novel was written by local author John Fowles. Lyme Regis also appears in another guise in Jane Austen’s novel ‘Persuasion’. Austen is known to have visited Lyme Regis twice – once in 1803, and again in 1804, and by all reports she adored the coastal town. Lyme has a sand and shingle beach popular with families and children will adore fishing for crabs off The Cobb or a round of mini golf in the gardens overlooking the Marine Aquarium. See amazing fossil collections and quirky displays on the town’s history in Lyme Regis Museum with free entry for kids or hop aboard one of the boat trips departing from the harbour. In and around Lyme Regis you’ll find a wide choice of accommodation from small hotels and welcoming guest houses to self-catering cottages and family friendly caravan parks.

Mary Anning of Lyme Regis is renowned as the greatest fossil hunter ever known and one of the key figures in the development of Geology. She was born in the town and spent all her life uncovering fossils from the local fossil rich cliffs. You can find out more about Mary’s life and her historic discovery of the complete skeleton of an Ichthyosaurus (fish lizard) at the Lyme Regis Museum which sits on the site of her former home in the heart of the town. Lyme Regis was one of the early Georgian centres for the beginnings of Palaeontology – the study of extinct plants and animals from fossil remains.

Go Fossil Hunting in nearby Charmouth 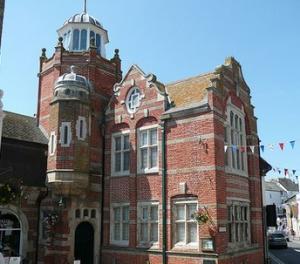 The town’s museum situated just above the old sea wall is a Grade II Listed Edwardian gem built in 1901 and commissioned by Thomas Philpot, a former mayor and relative to the famous fossil hunting Philpot sisters of Lyme who worked closely with Mary Anning. Plans are afoot to open a new modern extension to be named after the famous pioneer of palaeontology. The museum is one of Dorset’s most popular, particularly with children. Around 26,000 visit annually, and inside there are a host of quirky and fascinating displays including fossils and rocks in the geology gallery found in the revealing crumbling Lyme cliffs. The spiral design of the museum’s great staircase echoes the shape of ammonite fossils.

There are galleries on Early Lyme Regis with Bronze Age, Roman and Medieval finds alongside displays on the Monmouth Rebellion and a model of an early wooden construction of The Cobb. The development of Lyme as a port and its history of fishing and shipwrecks is also explored. The Landslip gallery documents the story of the great Undercliffs landslip of 1839, and in the Literary Galleries you can find out about Jane Austen’s visits to Lyme and other authors who either visited or lived here including John Fowles and G.K.Chesterton. Fossil walks and Mary Anning walks organised by the museum are a great introduction to fossil hunting, and guided rockpooling sessions are also available. 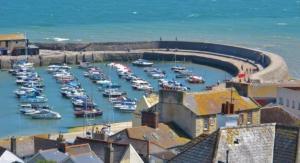 The Lyme Regis Marine Aquarium situated on the end of the Cobb harbour wall focuses in on marine life on the Jurassic Coast and the maritime history of Lyme. A unique fun day out for families, the Aquarium is interactive with hand feeding sessions and opportunities to hold starfish and even stroke a lobster! The variety of marine life includes Hermit Crabs, numerous fish, Sea Mouse and Short Spined Sea-Scorpion. There are also exhibits of nautical artefacts and a detailed history of the Cobb.

A National Nature Reserve, The Undercliffs between Axmouth and Lyme Regis show the transition from Triassic-Jurassic with Cretaceous rocks overlying them. They were created by successive landslips including a huge one that occurred on Christmas Eve 1839 at Bindon Cliffs where cultivated land slipped to the foot of the cliffs. The event attracted thousands of visitors. The understanding of geology was little known at this time but it was the first landslide to be described in scientific terms. The landslide block is now known as Goat Island and where turnip and wheatfields once stood it is covered in flower rich chalk grassland. On other slopes native woodland has colonised the rock where you’ll find lime, beech, sycamore and ash trees. You can pick up part of the South West Coast Path along a clifftop walk from Lyme Regis to Haven Cliffs at Axmouth in Devon.

Through the summer months your visit is most likely to coincide with one of Lyme’s many festivals and family fun events. The town hosts a big fossil festival annually in early May and later in mid-May Lyme Regis celebrates Mary Anning’s birthday with various events. Lifeboat Week takes place in July annually and early August is Regatta and Carnival Week. Lyme is a great place for a bonfire night getaway with fireworks and a bonfire at The Cobb. The New Year duck race opened by the town crier is not to be missed, and an Easter Bonnet Parade is held in April. During the Christmas season a Great Christmas Pudding Race and a Christmas Tree Festival take place as well as festive themed shows at the Marine Theatre.