Lydford village nestles on the western edge of Dartmoor, midway between Tavistock and Okehampton. The village is a picture-postcard scene of granite built period houses and visitors have long flocked to the area to visit the beautiful Lydford Gorge, the South West’s deepest gorge with a breathtaking 30m waterfall. Both the gorge and nearby Lydford Forest offer great walks with landscapes which are a real contrast to more rugged moorland walking right on your doorstep in Dartmoor. Within walking distance of the village there are natural pools like Black Rock, an off shot of the River Lyd, popular for cooling off and swimming in summer.


Accommodation in & around Lydford


The perfect peaceful Dartmoor retreat, Lydford contains some delightful 16th century inns serving fine food and ales and is a popular stop off point along the West Devon Way, a 37 mile route running from Okehampton in the north to Plymouth in the south. The shorter 4.5 mile section of the route from Lydford to Mary Tavy is a popular local walk. The Granite Way cycle trail also runs from Lydford to Okehampton, forming part of the longer Coast to Coast cycle trail. 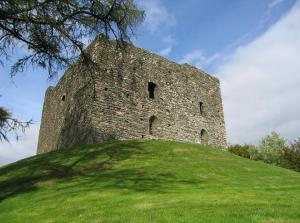 During the Anglo-Saxon period Lydford was an important coin minting town producing the Lydford Silver Pennies – Lydford coinage has even been discovered in Denmark. The village has three ancient landmarks including an elevated stone 13th century tower on a mound constructed as a prison and court which in its day had a gruesome reputation for the harshest punishments. An earlier Norman earthwork castle is located to the south of the village and on the northern edge there are Saxon town defences. In the 10th century (891 to 901) King Alfred fortified the town against Viking invasion.